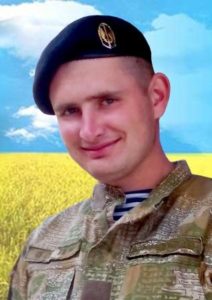 According to the Presidential Executive Order №104/2017 on April 10, 2017, a junior sergeant Taras Pronchuk was posthumously decorated with the Third Class Order For Bravery “for personal courage demonstrated in the protection of sovereignty and territorial integrity of Ukraine and the self-sacrificing performance of the military service”.

The last message to his girlfriend begins with: “Two weeks ago I was offered to be sent to Mykolaiv, as I am not 20, that’s why I should be withdrawed from a fire area, but I refused. Six days ago I got to the military hospital with a light post-concussion syndrome and I was said not to return back to the fire area, but I stayed again, because we must protect you. Now you know the truth. Who else if not me could protect you, my mother, my brothers and Ukrainian people?” 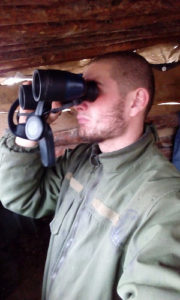 It was written by a man who was only 19. Taras Victorovych Pronchuk (call-sign “Cannibal”) was born on 6 of August 1997 in the village of Khotyn, Rivne district, Rine region.

He had studied in Horodok secondary school. Later he entered Rivne technical college of the National University of Water Management and Enviromental Engineering, and graduated in 2015 as an electro-gas welder specialist.

He had a strong character and unconquerable spirit. Taras used to find a solution of any problem. He was a real host at home, jack-of-all-trades. Being always calm, he was the man who had always brought people around the feeling of security. He was the wall that guarded others from problems.

Taras always used to help elder people, and he loved to play with little children. Maybe, he dreamed to have a baby in the future, because dreams are bright and exciting when you are 19.

But in November, 2015, he signed a military service contract with the Armed Forces of Ukraine. He was a senior sailor, machine gunner in separate battalion of 36th separate marines’ brigade.

During the period of serving, he got several medals and rewards: “Courage and Honour”, “For the defense of Mariupol” and others. His primary purpose was our victory. And he had aspired to it. But young people perish on war, those who are healthy and strong ones and might be only 19.

Viktor perished on February, 16; he was killed with the bullet of a sniper somewhere between settlements Vodiane and Sakhanka, Donetsk region.

Taras Victorovych was buried on February, 19, in Khotyn. He left his mother and three younger brothers.

The last message in his life addressed to the girlfriend was finished with such words: “It doesn’t matter if I am young or not. I want my children to live under the peaceful sky. If my fate is to die here, so be it. If not, I’ll come back home and we’ll be living in the country, where there is no war.” He was only 19. At that age your heart is hot, clean and ardent. You open up to new feelings, dreams and desires, like a flower. When you are 19, life is only beginning with all its paints and tints. When you are 19, you must not perish, but the war does not ask about your age. When you are 19, you cannot think of death, but sometimes it thinks of you.

He became a Hero for his girlfriend. And for me as well. 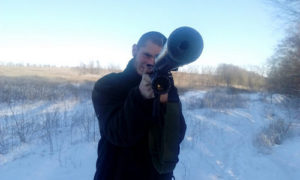 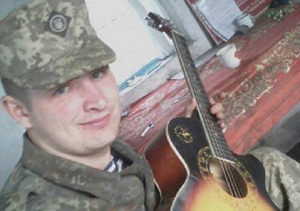 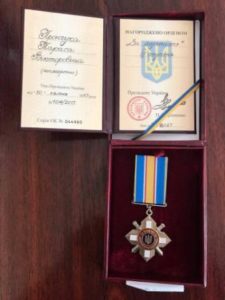 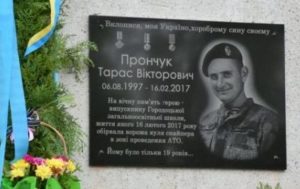 Memorial plaque in honor of Taras Pronchuk was opened on the facade of a local school in the village of Horodok, Rivne district. A lot of people gathered in the school yard for the occasion – his relatives, friends, students, teachers, participants of the АТО, clergy. Flowers were laid on the memorial plaque following the minute of silence to in memory of the Hero.