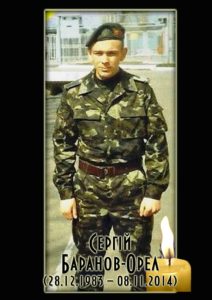 Serhii Baranov-Orel was born on December 28th, 1983, in the town of Klesiv. After finishing Klesiv secondary school he was called up for military service in the Armed Forces of Ukraine.  Having completed the regular military service, he started to work at Klesiv Aggregates Quarry.
At the beginning of August 2014, he was called up to the 79th Air Assault Brigade of the Armed Forces of Ukraine and was appointed as a soldier of a private rank of 4673 unit.
One of the military missions of the unit was to protect Donetsk Airport. Serhii was among the soldiers, called “cyborgs” for their resistance and steadfastness demonstrated during heroic defence of the airport.
Serhii was wounded, lost a lot of blood, and died on November 8, 2014, around 4 a.m. at Donetsk Airport. On November 12, 2014, everyone from the town of Klesiv came to pay the last respects to the warrior.
After a Requiem in the Cathedral, he was buried next to his father at the cemetery of his native town. He was awarded the Medal for the Defence of Donetsk Airport (posthumously).

He had a mother, a wife and two little kids.

According to the Presidential Executive Order № 915/2014 on December 4, 2014, “for personal courage and valour, demonstrated during the protection of the State sovereignty and territorial integrity of Ukraine, fidelity to the oath of allegiance, high professionalism”, and on the Day of Armed Forces of Ukraine” Serhii was awarded the Order “For Courage” III class s (posthumously).

It has not been three months since the 20-year-old soldier Yaroslav Kuryshko, who died in the battles near Donetskwas was buried in the village of Karasin. The young man was a shooter in the 30th separate mechanized brigade from Novograd-Volynsky, where he served under the contract since 2013. And now, for the second time last week, Sarny District buried a fellow countryman, who was mortally injured during the ATO at the east of the state.

Serhii Baranov-Orel died while defending the Donetsk Airport, said Valentyna Kukharchuk, a military accountant at Klesiv Village Council. A young man worked in peacetime in Klesiv Aggregates Quarry. It was from there that on August 2 this year, the Sarny Military Commissariat mobilized him for service in 79th Mykolaiv separate Air Assault Brigade of the Land Forces of the Armed Forces of Ukraine. According to the Decree of the President of Ukraine dated by July 21, 2014, No. 607 “On partial mobilization” Serhii was sent to the 4673 unit. After all, the young man served in the military units A-3026, A-2639, belonging to the Northern Territorial Department of the Military Service of the Law and Order, where mastered the profession of shooter and grenade launcher. There was a great need in these specialists during the third wave of mobilization. And in the 79th brigade, he also became a sniper.

The soldier died on November 8, during the shelling at the Donetsk Airport. According to the narratives of the fellow soldiers, having received injuries, he bandaged his leg and has not left his fellow soldiers and the fighting position. If only Serhii was provided in time with qualified medical assistance. If only … His classmates, waiting, when the Hero’s body was delivered to a small homeland, put candles on the way to the cemetery. On the day of the funeral the teachers and students of local educational institutions, residents of the settlement made a living corridor of flowers from his home, where he lived with a single mother to the cementery.

Serhii Baranov-Orel lost his father several years ago. His grandfather, who took part in the World War II and his grandmother, who had been working as a medical sister all her life, lived on the same street with him. Did they ever think that they would bury their breadwinner, their one and only grandson? It is difficult to perceive not only by the soul, but also by mind. They were so proud of him, and that bloody shot of an enemy turned over their life. Who knew that Serhii would return home not to celebrate the victory, but in the coffin.

When the soul is in pain it is terrible, hellish torment, and nobody can be able to quench that pain. I understand the grief of the mother who lost her son. God forbid that gray-haired men, who outlived their grandchildren would cry. They have only one question: “For what?” Thousands of residents of the village and settlements of the district came to see the real son of Ukraine to his last journey. For courage and bravery, soldiers from the Donetsk Airport were called “cyborgs”. Among them was Serhii Baranov-Orel and his sworn brothers

With the blessing of the head of the diocese, the Most Reverend Anatolii, Metropolitan of Sarny and Polissia, the dean of the Sarny deanery Archpriest Oleksandr Kokor, in co-ministry of the clergy of the diocese, headed the funeral service of the deceased warrior. The funeral service took place at the Holy Annunciation Church of Klesiv. Strangers, classmates, those who worked with Serhii, fellow villagers, servicemen were standing bowing their heads. Everyone was united by the grief of the loss of the son, who, in obedience to the order and sacred duty, defended Ukraine and his home.

Under the exclamation: “Glory to Ukraine! To the Heroes of Glory!” the soldier was buried at a local cemetery.

God rest the soul of Your deceased servant Serhii! Let the tears on you become the flowers on the ground for which you fought, the sun will shine on meadows, gardens, and endless fields. Let there be future for those who live here today. You gave away the most valuable thing that you had…

To remember the hero 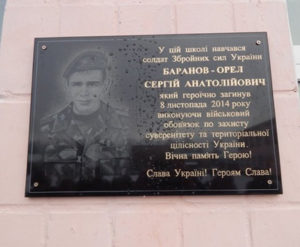 hii Baranov-Orel died during the ATO at the east of the state, protecting Donetsk Airport.  He would have turned 32 years old on December 28th. Today, residents of the settlement, students and their mentors gathered at the Klesiv secondary lyceum-school to open a memorial plaque in memory of the deceased fellow-countryman. The event was attended by deputy chairman of the regional state administration Ruslan Spereninov, acting director the military commissar of the Sarny military commissariat Petro Lutsyshyn and the head of Klesiv Victor Buyny.

They talked about Serhii Baranov-Orel as the defender of the ideals of honor and truth, the future of our country and Ukrainians. The memory of the courageous hero from Klesiv will forever remain in our hearts, he will be an example of heroism for future defenders – current students of Sarny District.  His feat was not useless.

Sincere words about him said Serhii’s headmaster Nadiia Abramchuk and Halyna Savchuk, who headed the school for several years. They noted that the school is proud of its hero and defender.

A minute of silence was present to the honor of the deceased warrior. Mother of the hero, Oksana, took off the fabric from the plaque, which was blessed by the prior of the Blessed Mary’s Cathedral Father Roman. Students put flowers on it. According to the local custom, Oksana gave the sweets to the children.

For bravery and love for Ukraine 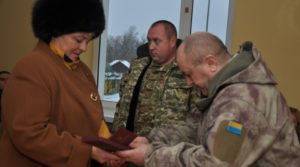 present to reflect on life, the present and the war. And to judge how we live under the peaceful sky, and how scary it is when state decorations are handed to the relatives of our defenders posthumously.

The hearts were full of pride and pain, as ATO participants and volunteers were rewarded with them. Unfortunately, posthumously. For his personal courage and heroism, Serhii Baranov-Orel, who died in November 2014 during the shelling fired by Donetsk terrorists, was awarded the Medal of the National Security and Defense Council of Ukraine “For the Defense of the Airport.” This honorary medal, in the touching atmosphere, was given to the mother of the hero.