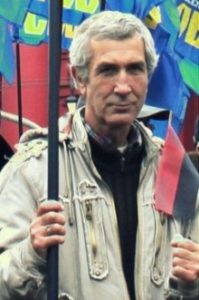 Heorhii Arutiunian was born on July 4, 1960, in the city of Batumi, the Georgian Autonomous Republic of Adzhar. He was formerly a citizen of Georgia. Heorhii lived in Rivne, where, at first, he obtained a residence permit and then the Ukrainian citizenship. He earned his living doing seasonal work abroad. He was actively engaged in community work. Being the All-Ukrainian Union “Svoboda” activist, Heorhii Arutiunian worked in the party tent for several years. He was an active participant of its agitation campaign and constantly visited all-Ukrainian patriotic events.

Though he was of an Armenian origin, he really loved Ukraine, its culture and history. He became a true patriot of his new Motherland and felt the pain of his new country. He was concerned about its destiny, supported it in its struggle for independence, wished it would have better future. Heorhii took an active civic stance and could not put up with disenfranchisement and social injustice. He was ready to sacrifice his life for Ukraine.

During the winter of 2013-2014, Heorhii Arutiunian stayed at Maidan Nezalezhnosti in Kyiv where he actively participated in the Revolution of Dignity. On February 20, 2014, he died of a gunshot injury near the Independence Monument. The sniper’s bullet penetrated the left side of his neck and exited out of the right shoulder. The body of the deceased was moved to St. Michael’s Golden-Domed Monastery. Later it was transported to Rivne. Heorhii Arutiunian is buried at the “Nove” Cemetery in Rivne.

According to the Presidential Executive Order on November 21, 2014, Heorhii Arutiunian was posthumously conferred the title of the Hero of Ukraine and awarded with “Gold Star” Medal for civic courage, patriotism, heroic defense of constitutional principles of democracy, civil rights and liberties, selfless service to the Ukrainian people, shown during the Revolution of Dignity.

On July 5, 2015, Patriarch Filaret of the Ukrainian Orthodox Church of the Kyivan Patriarchate awarded ecclesiastical medal “For Self-Sacrifice and Love for Ukraine” to the Hero posthumously.

On June 3, 2014, according to the decision of Rivne council, Heorhii Arutiunian posthumously was conferred a title of Honorary Citizen of the Rivne City and the First Class Decoration of Honor For the Merits to the City.

The Story of Heorhii Arutiunian

Heorhii Arutiunian was born on February 6, 1960 in Batumi, Autonomous Republic of Adjar, Georgia. In the year of 1981 Heorhii moved to Rivne on the terms of permanent residence habitancy. He worked for more than 20 years in Rivne Water and Sewer. Heorhii was an active participant of Revolution of Dignity. Since the very beginning he was at the Maidan. It was his third Revolution. Before that he had taken part in the Orange revolution and the Revolution of Roses in Georgia. Since 2011 Heorhii was a great supporter of All-Ukrainian Union “Svoboda”, for almost two years he worked as agitator in the party’s tent. Heorhii had a cover name “Kavkas” and was a member of Rivne Self-defense Hundred of Maidan. He wanted to save up money to install a tombstone on his wife’s grave whose name was Natalia, she was Ukrainian. Also he wanted to give a chance for his friends and party fellows to visit his Motherland. His friends remember that he had never feared death. Heorhii thought that a man should die with dignity at the battle. He was just afraid that his kids will become orphans.

But it happened. In the morning of February 20, 2014 he and his sworn brothers tried to hold flaming barricade at the Maidan Nezalezhnosti and to protect people from snipers by throwing tires into the fire. From the words of Yurii Kokhanets – member of  “Svoboda” in Dubno: “In the morning “Kavkaz” and I tried to get to stele at the Maidan by stairs from the side of Khreshchatyk Street. Berkut soldiers were throwing flash-bang grenades at us. When we came closer, Heorhii said that snipers were shooting and we should go back. I put tires down and started to back away and when I turned my head I saw that “Kavkaz” took tires and started to run to the barricade. At that moment he felt down. He was killed by the sniper who was located at Instytutska Street.” Heorhii’s three daughters: Rehina, Kalapsi and three year old Ashkhen became orphans. Custody of children was taken by their older sister from their mother’s side – Anna Adamchuk.

At the night, on the boarder of Rivne Region, the column of cars that were meeting the car with the bodies of Heavenly Hundred heroes spread for a few kilometers. 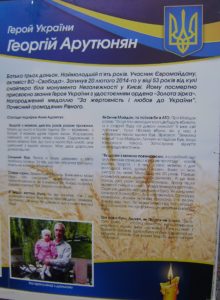