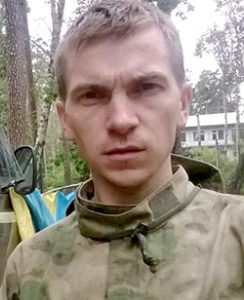 Mykola Hordiichuk was born on May 26, 1986, in the family of a serviceman in the city of Rivne. A year later, his family moved to the city of Kamianets-Podilskyi and since then he had lived there. Mykola was a junior police sergeant and a policeman of the battalion of the special-purpose Harpoon of the Ukrainian Police Headquarters in Kyiv Region. He had been a member of the Ukrainian National Scout Organization Plast since 1993. He was a senior scout and since 2009, an instructor of the military-patriotic camp “Legion-12”.

Mykola graduated from Kamianets-Podilskyi National Ivan Ohienko University with a degree in psychology. Mykola Hordiichuk was a member of a team of the Club of the Funny and Inventive People “Nash Format”. Moreover, he hosted a youth program “The Cadres’ Show”. Mykola was a founder and a leading singer of the band “Svoieridne” and later of the band “The DenDi”. He was a famous showman in the city of Kamianets-Podilskyi.

Furthermore, Mykola was an active participant in the Revolution of Dignity as a part of the 15th Sotnia of the Maidan Self-defense “Free People”. He joined the service in the battalion in April 2015. Mykola Hordiichuk planned to get married in August. However, returning from a military mission, he was blown up by the improvised explosive device (IED) near the checkpoint Shakhta (the Mine) situated between the town of Avdiivka and Yasynuvata, Donetsk Region. He received numerous fragmentation wounds of the extremities and trunk and, as a result, died during the transportation to the Сhervonoarmiisk Military Hospital.

By Decree of the President of Ukraine No. 546/2015 on September 15, 2015, Mykola Hordiichuk was posthumously awarded the III Class Order For Bravery “For personal courage and high professionalism, demonstrated in the defense of the sovereignty and territorial integrity of Ukraine, loyalty to military oath”. Posthumously Mykola was awarded the Kamianets-Podilskyi City Community Service Award for specific achievements in service, contribution to the quality of life as well as one of the most honorable Scout (Plast) awards – the Cross for the Heroic Deed for the bravery in the struggle for the Motherland.

Finally, Mykola Hordiichuk was given the title of the Honorary Citizen of the city of Kamianets-Podilskyi for personal courage and heroism demonstrated in the protection of the sovereignty and territorial integrity of Ukraine, loyalty to the military oath.

In August, Mykola Hordiichuk (“Hryzun”) had to get married but the Hero was buried today on July 25, 2015.

Over the Smotrych River, they bid farewell to the soldier of the special-purpose battalion “Harpoon”. He was known among the Ukrainian Scouts as “Hryzun”, and for his friends and musicians like “Nik”, who 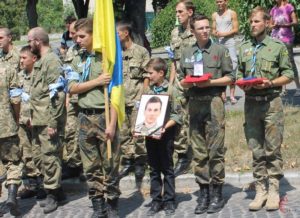 was a public activist and simply a real patriot Mykola Hordiichuk. There were not hundreds of people but thousands. Most of them were young people from the East, Scouts, young musicians and friends came to farewell the soldier. Those who knew him as always smiling and with a spark in his eyes, could not believe that he is no longer alive. “We couldn’t believe that he isn’t with us until there was no official confirmation that he was killed and until we got the last news”, said his friend Victor. The death of Mykola came as a terrible dream to his relatives and others.  His father and mother did not know that their son was on the front line because he told them he was in the training camp. “Consciously and subconsciously Mykola lived for the sake of Ukraine and for which he perished. I believe that the death of such patriots is not useless”, said his father Mykola. He received such devotion and patriotism from the family in which his father and brother were militaries and from Plast National Scout Organization of Ukraine, to which he had entered at the age of seven. To his parents, Mykola said that he was at the training and not on the front line.

Only pleasant memories of Mykola has the commander of the special-purpose battalion Konstantyn Zhuk, who came to say goodbye to his subordinate. “Before he got into our ranks, he successfully graduated from the gymnasium after which he was officially appointed to the Harpoon. Mykola was one of those who did not hide but always went ahead. He was the soul of the company but unfortunately returning from the combat task was blown up by the IED”, told the combatant.

The city did not experience such pain for a long time. It is a loss when thousands of hearts are shrinking from the thought that Mykola Hordiichuk will no longer appear on the streets of his hometown and will not step a wedding towel in August as planned. Posthumously Mykola was awarded the Kamianets-Podilskyi City Community Service Award for specific achievements in service, contribution to the quality of life as well as one of the most honorable Scout (Plast) awards – the Cross for the Heroic Deed for the bravery in the struggle for the Motherland. “He loved his family, loved his friends, his future bride but most loved Ukraine”, said senior brother Maxym. The Hero was carried out with bunches of flowers, applause and the exclamation “Heroes do not die”.To say goodbye to the soldier came not only people from Kamianets-Podilskyi but also friends from many other Ukrainian cities.