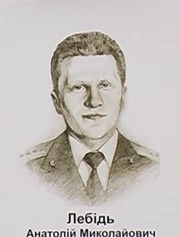 On September 17, 2015, the City Council of Rivne issued the Decree №575 that conferred Anatolii Lebid the title of the Honorary Citizen of Rivne.

The dead soldier Anatolii  Lebid was buried in Dubno this weekend

Senior sergeant was 36 years old. The information about the bringing the military to suicide because of a long staying in the service was refuted by a press-centre of the operational headquarters “Pivnich” [“North”]. The information was circulated on one of the Central TV channels.

There was a report that Anatolii Lebid died in a result of careless arms handling during the performance of the official duties. However, the military do not disclose where the event has happened; only saying that it was not in a combat zone. It is known that Anatolii Lebid had a wife and two children.

Viktor Shubecz, press officer of the operational headquarters “Pivnich” [“North”] said, “The Command of 55-th separate brigade of communication officially reported that Lieutenant Anatolii Lebid died in a result of careless arms handling during the performance of official duties. The rotation of the division in which the senior sergeant Anatolii Lebid performed the tasks was held today. It was a planned event, and he knew about it in advance. The command of the military unit considers the distribution of inaccurate information as dismissing the military unit and the Armed Forces in general.”

On the holiday of the Protection of the Blessed Virgin Mary and on Defender of Ukraine Day on October 14, 2015 in the center of Rivne next to the Holy Resurrection Cathedral and the vault of the city – the column of the Virgin Mary, a stele of memory for the nineteen Heroes of Rivne was opened. Here you can see the pictures of the sixteen dead Rivne ATO participant soldiers and three Heroes of the Heaven’s Hundred Heroes is.

Remember the heroes of Dubno

On March 19, a year after the death of Anatolii Lebid, the senior officer of the ATO participant, an honorary resident of the city of Rivne passed. On March18, the Chairman of Dubno district state administration Yurii Parfeniuk and Satyiv village chairman Larysa Krupko visited Anatolii’s parents, who live in the Olybiv village, and put flowers to the grave of the Hero of Ukraine.

According to the press service of Dubno RGA