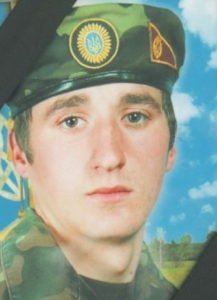 Leonid Ozeranchuk was born on December 1, 1991, in the village of Tomashhorod, Rokytne Raion, Rivne Oblast. In 2009, he finished the local Educational Complex “Comprehensive School-Lyceum”. In the same 2009, Ozeranchuk family moved to the village of Osnytsk for the permanent place of residence.  Leonid entered Sarny Vocational School №22 which he finished in 2011 obtaining the qualification of an automobile mechanic. From 2012 to 2013, Leonid served in the Armed Forces of Ukraine in the forces of the Ministry of Internal Affairs of the Autonomous Republic of Crimea. Having returned from service, Leonid worked on a saw machine in Tomashhorod Forest Division of the Governmental Establishment Klesiv Forestry Enterprise.

Leonid died on May 22, 2014, during an armed attack on a checkpoint in the area of Velyko-Anadol Railway Station in Donetsk Oblast.

The deceased soldier left parents, two sisters and a fiancee.

According to the Presidential Executive Order №311/2015 on June 4, 2015, Leonid was posthumously decorated with the Medal for Defender of the Motherland “for personal courage and high professionalism demonstrated in the protection of sovereignty and territorial integrity of Ukraine, loyalty to the military oath”.