He died on August 9, 2014, while performing combat tasks. Oleksandr left a 13-year-old daughter.

According to the Presidential Executive Order №103/2016 on March 21, 2016, Oleksandr was posthumously decorated with the Third Class Order For Bravery “for personal bravery and high professionalism demonstrated in the protection of sovereignty and territorial integrity of Ukraine and loyalty to the military oath”.

Rivne region in grief: in Kvasyliv people say goodbye to the hero of the ATO (photo report) 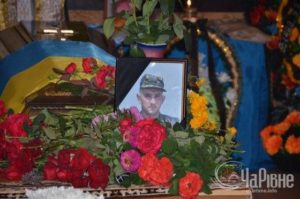 Today in Rivne region, in the town of Kvasyliv, people came to say goodbye to Sulitskyi Oleksandr Serhiiovych, the soldier who died in the ATO zone. He was born in 1979. The man served in the battalion “Horyn”. He died of a grenade break when he covered his combat friend. We also remind you that today the funeral of another soldier Oleh Tarasiuk will take place. He will be buried with all the military honors on the Alley of Fame at the Rivne Cemetery “Nove”.
Yesterday the soldiers from the Operational Command North paid tribute to lieutenant colonel Viktor Novitskyi.

On October 1, the soldiers of the “Horyn” battalion who are under treatment and rehabilitation at the Rivne Military Hospital visited the grave of their fellow Oleksandr Sulitskyi. To the grave of our fellow citizen and hero two buses of his friends arrived.
They gave the last respect, bowed in indescribable sorrow, and put the funeral wreath at the grave of their brother-in-arms. The men said that Oleksandr would always remain in their memory, cheerful and smiling, sociable and kind, and they appealed to the representatives of the local authorities with the request to name the street in honor of Oleksandr Sulitskyi, to place a memorial plaque in the educational institution of the village and to support his family financially and morally. “All these measures are necessary in order for our brothers-in-arms to remain in the memory of descendants, as heroes who has fallen for independence and territorial integrity of Ukraine,” said the soldiers of the battalion “Horyn”.

The wounded, but courageous and inexhaustible patriots, after honoring the memory of their brother Oleksandr, returned to the hospital. The warmest impressions that left after communication with them are difficult to describe, so I take a look at the buses and whisper, “Lord, save them.”

Oleksandr SULITSKYI – a warrior with a knight’s heart

When they brought a small bundle from the hospital to the apartment, which young Sulitsky family rented in Zdolbuniv, parents could not find the proper name for a four-kilogram warrior for a long time. Then a four-year-old sister, without thinking long, christened her brother – Jaszka, which translating from the child language meant Sashka. Iryna MURASHKO, the sister of the deceased, says that her parents met and married in Russia, where they worked. She was born there, but a little brother was born already in Zdolbuniv. Sasha grew up as an extremely active and friendly child. Wherever he was, his sister says it was always loudly and funny, because he had been the most intriguing organizer of all games and competitions, he gathered children around himself, and never harmed anyone. 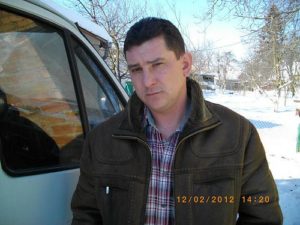 The deceased hero’s wife – Nadiia SULITSKA remembers: – Friends could call him any time and he was always ready to help. Once, at 3 a.m. he went by taxi to Mlyniv to carry the wheel to a neighbor. He did not expect any thanks from anyone, he just wanted to be needed. Sashko went to school at the age of 7 and was a good pupil. He was interested in History and studied it not just at lessons but also took a variety of books about ancient times from the library and read them at home. All his childhood Alexander dreamed of driving a car, so immediately after the 9th grade he went to Kvasylyvskyi STC to become an auto locksmith. After graduating Oleksander worked as a driver a bit until he went to the army. On June 19, on the day of his birth, Alexander Sulitsky became the father of the daughter Oleksandra. Of course, like every man, he wanted a boy, but he said that everything was still ahead there will be other children.

Like incorrigible optimist, Oleksander always dreamed about better life in Ukraine. When people began to go to Kyiv to the Maidan, he was on the hospital bed and regretted that he could not go to recapture the European future of the country. Sashko had many reasons to be not called to the ATO: a weak vision (a man could drive only in glasses) and acute pancreatitis. Taking into account his illnesses, he decided not to wait for conscriptions, not to pass commissions, but to go as a volunteer. After two months of training at the range in Rivne, Oleksander was sent to the East, into the volunteer battalion “Horyn”. Oleksander’s wife remembers: – After few weeks of staying in the East, Sasha has changed, becoming locked and silent. He said that everything was fine, but it was not so. He was calling and greeting but saying: “Wait, we’re probably being shelled, we’re entering the forest belt”. After few minutes he called back, saying that the wheel flew away, on one of these drives he came with a partner but it was shelled. They didn’t wear bulletproofs – they hung them on the windows. For the last time his wife and daughter heard Oleksander on August 9 at 12 o’clock at night. As usual he said that everything was fine and asked to say hello to his sister Irina. At 4 o’clock in the morning next day Oleksander died.

Cowokers said that he had exploded on a grenade. Hearing a click, he had the opportunity to throw the granade away, but there was gas trucks nearby and he made sacrifices to save the boys. The commander says that it would have been much more wounded that day.

Oleksander’s sister Iryna Murashko says that he always was combative. He never hid behind others, he showed his heroism constantly. That’s how the hero died. He probably could not die in a different way. All Kvasyliv burried him.

A memorial plaque to Oleksander Sulitskyi was opened 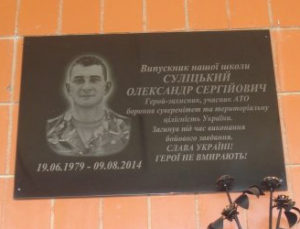 At the end of the concert program dedicated to the 24th anniversary of Independence of Ukraine, the participants of the event honored the memory of the deceased soldier of ATO Oleksander Sulitski with the opening of a memorial plaque on the facade of the Kvasyliv NEC “school-lyceum”.

The flag bearers with the battle flag, the State Flag and the Flag of Kvasyliv, children with yellow-blue flowers, the soldier of the battalion “Horyn”, members of the ATO, Oleksander’s relatives and friends, residents of the village – all these people headed the solemn procession from the House of Culture to the “school-lyceum”.

Oleksander Sulitski died during the execution of the combat mission in the area of the anti-terrorist operation in the age of 35.

His daughter Oleksandra and his fellow Roman Aleksiichuk, on behalf of all those present, were given the right to cut a black ribbon and open a memorial plaque.

After that people paid tribute to Sulitskyi Oleksander Serhiiovych with a moment of silence, inflammation of lampshades and laying flowers on a memorial plaque. A soldier of the battalion “Horyn” Andrii Bertash, director of the Kvasyliv NEC “school-lyceum” Vira Liudvik, deputy of the settlement head Anatolii Kotovskyi made a speech during the event. They said what kind of person Oleksander Sulitski during his lifetime was. The deputy of the settlement head transferred to the Kvasyliv NEC “school-lyceum” the battle sign of the battalion “Aidar”, which records soldier’s aphtographs and their historical statements about love to Ukraine.

In honor of the hero of the antiterrorist operation Oleksander Sulitski, participants of the solemn meeting of opening the memorial plaque went to his grave in order to bow and thank for the loyalty to the state and people of Ukraine.