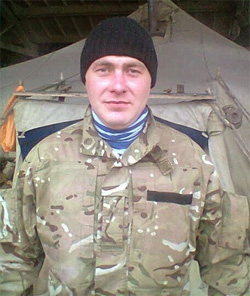 Petro Nakydaliuk was born on July 4, 1990, in the village of Ploska, Dubno Raion. He finished Dubno Comprehensive School №3 and attended Dubno Physical Culture School. From the age of 17, Petro went in for sports professionally. He became a Candidate Master of Sports of Ukraine in arm wrestling. In 2014, he was called up into the Armed Forces of Ukraine. The 24-year-old military officer was a tank man. On March 11, he was killed in the village of Pisky (Yasynuvata Raion) near Donetsk.

Ruslan was decorated with the Order For Bravery for courage and valor.

According to the Presidential Executive Order #573/2015 on 10 October 2015, he was posthumously decorated with the Third Class Order For Bravery “for personal courage and high professionalism demonstrated in the protection of sovereignty and territorial integrity of Ukraine, loyalty to the military oath”.

On March 15th Dubno region bid farewell to its defender and hero Petro Nakydaliuk, who was 24 years old. The soldier had tragically died on March 11th in Pisky, Donetsk region, while carrying out his military duty to the state.

About 5000 local residents went out on the central square of the city to bid farewell to the lost soldier. Among them: the family of Petro Nakydaliuk, deputy head of the Dubno region council Oleksandr Kozak, chairman of the Dubno region state administration Ruslan Syvyi, Mayor of the Dubno city Vasyl Antonuik and people’s deputy of Ukraine Oleksandr Dehtiarchuk. There was the memorial for the repose of Petro Nakydaliuk at 10 a.m. on the Independence Square. Later, Dubno residents were saying goodbye to a young man for a long time. Ukrainian people bid farewell to our defender with the tears in their eyes, falling on their knees. Dubno residents were following the Hero to the borders of the city, everyone from Ploska also went out on the streets. Petro Nakydaliuk was buried on March 16th in his native village. On this mournful day, about 3000 people came to the church to pay their respects and pray for the peaceful repose of the brave soldier, our defender Petro Nakydaliuk.

Petro Nakydaliuk was very kind, decent and hard-working guy. Studying at Dubno Sport School, from the age of 17 he was professionally going in for sports and became the Master of Sports of armresling in Ukraine. It is known that Petro Nakydaliuk was mobilized to the Ukrainian Armed Forces a year ago. He was awarded the badge of Courage for the courage and heroism.

Recently Petro came home on a vacation. He went to his school, where he met pupils. On March 10th the young man was talking on a phone with his friends, but the next day the link suddenly disappeared. A farewell letter which was read on the funeral touched everybody. The letter had been given on August 27th by the young man to his friend who had to pass it to the relatives of the man in case of his death during a war.

While ceremony was being conducted, a flock of pigeons flew into the air; one of which was quickly rising up and falling down several times. Maybe that was a soul of our defender, which came to say goodbye to the friends of his.

War takes the best sons of Ukraine, the greatest minds of our nation. Today with shouts “Heroes don’t die!”, we must do our best to prove that the death of soldiers wasn’t bootless, but the memory and glory of their feats will always be in the heart of every Ukrainian. 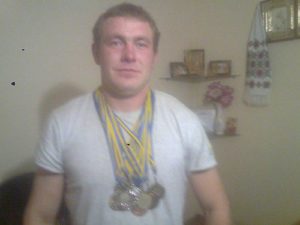 On March 15th bells of a memory of lost Dubno resident Petantio Nakydaliuk sounded in Dubno churches. These bells captured in memory moments which couldn’t be forgotten. They had to testify these terrible crimes and warn others to conduct them in future. 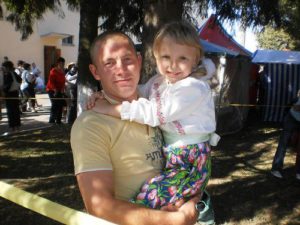 On 11th March while carrying out a military task in the zone of counter-terrorist operation near Shyrokino, Mariupol path, died our countryman – Petro Nakydaliuk from Dubno.

He was a simple Ukrainian guy, who loved his family, friends, his Ukraine.

Petro was born on July 4th in 1990 in Ploska. As a child he was a hard-working boy. At the age of 3 he lost his father. In different times, because of different reasons, he was parted from his native village, where lived his closest people – grandmother and grandfather. However when he began to study at Dubno general educational school #3, he only studied there 8 years. After the death of his grandfather he made a decision to look after his seriously ill grandmother. Because of this he entered to the 9th grade at school in Ploska. Later he studied at Dubno vocational and technical lyceum.  While reminding of Petro’s life in that time, there appears a kind smile through the tears in the eyes. Because this young man was bright. When he was walking on the street, he didn’t pass by any people.

“Good afternoon, Mrs. Ann…How are you, grandpa…Mrs., why are you so sad? Do you need any help?”. And he helped everyone to chop firewood or plant potatoes or something else…

Petro loved his small garden. Here he planted trees and flowerbed on his own. He looked after his crofts as the most careful host…Neighbors were always surprised:

-He is so young and such a good host! He definitely looks after his grandmother as good as possible.

He was very determined, always tried to reach his goals. While studying at lyceum, once he caused troubles for his teacher and relatives. He really wanted to buy for his family modern things, for example microwave oven and others. But where could he take money? So he borrowed it from his grandmother, forbad her to tell this to his mother.  And went to work abroad…After he returned, he brought not only modern things, but also different gifts for his mother and family.

He didn’t talk a lot. From the age of 17 he was professionally going in for sports. He studied at the Sports School in Dubno region, became the Master of Sports of armresling in Ukraine.

Petro was a real citizen of our Motherland. During all difficult moments of Ukrainian history he wasn’t looking for any reasons to escape the responsibility. He was with his friends on the Square in Kyiv at the time of an uprising. By the way, he also found a lot of work there. He was looking after everybody, doing different tasks, he remembered to chop firewood and put them not only near his tent…

He was mobilized to the Ukrainian Armed Forces on August 28th in the last year. Before his departure he was attentively looking at his garden…there were so many things to do…To install new windows, paint a house, plant trees…He also remembered to go to the grandmother’s grave…He said goodbye to all his friends. A Ukrainian flag was on the fence…

In the zone of counter-terrorist operation he was from September 19th as a tanker-gunner. Despite difficult service, he had no complaints. He was extremely patient. At some period of time it seemed like a fate was nice to him. He had to be sent in Debaltsevo, but he wasn’t because of disease…His brotherhood, whom he had to join, didn’t come back…

He was even lucky to go on the vacation home, visit his school, meet with friends.

At that time Petro’s friends asked him to lie that he was ill and not to go to Donbas once again. But the young man didn’t even want to listen to this. Because he always said that the state had to be protected.

When he returned to the place of disposition near Shyrokino, on the Mariupol path, he, together with his brotherhood, provided the stability of soldiers of the National Guard Regiment “Azov”. They eliminated many tanks and posts of enemies.

According to general Fedorov, Petro was always in front of the army. For courage and heroism the trooper Petro Nakydaliuk was awarded the badge of Courage.

A commander of the crew announced the death of the countryman, but no one wanted to tell this mournful news to his mother. However it was already known all around Dubno region. Everybody knew it except his mother. That evening she was speaking with her son on the phone. He sounded as usual, gave her several orders about his small garden, but she felt anxiety and didn’t know why.

Later she received a phone call from one of her acquaintance:

-Nila, is it true that Petro is gone…

And the rest was like a bad dream, full of pain and sadness.

On August 27, before going to the front, Petro left his friend Ivan Homyduik the letter.

-This is the letter for my mother. If I return, burn it. If no, give it to her…

Before the very funeral the mother had read the last words of her son: “Mother, I will be sorry if I don’t return. I love you all!

Don’t worry. Everything will be fine.

Please, finish the building which I started. Make a bench near grandmother’s grave, if I don’t return!!! Say sorry to her, because I won’t be able to do this!

Save our house and all the rest. I know that I won’t return.

Please, mother, forgive me. Forgive me my behavior and the fact that I wasn’t saying sorry to you earlier.

I want L’onia to move to our village together with Luida and their baby!!! Look after my garden!

Remember me the way I am!

I love you all!

He loved his life, his family, but he loved his motherland Ukraine most of all, he gave his life for it.

But the nation which was standing on their knees for their heroes will NEVER do this for their enemies!

Today, however, we keep hearing alarming news from Shyrokino, many soldiers are gone, we still believe that one day the war will end, towns will be rebuilt, the life will be normal again…But those who were taken by heaven will never return…And the sorrow will never disappear from mother’s hearts.

Knocked on the east tricks

It bypassed human and God’s laws.

And the heart pulses with blood

They devote their saint lives

What will a mother say about her heroic son?

He died, probably, not for nothing.

This soldier for her is only a child.

A child that should have lived. But it’s gone.

There is nothing to do with this grief.

A painful tear shows the truth,

In her heart – storm of tears,

In her soul – hidden thunder.

In the cemetery – there is no empty space.

Who is lost in our mother Ukraine,

Who is lost in the bright blue sky.

On the solemn line were present the mother of Petro Nina Shatnik, the head of the district state administration Yurii Parfenuik, deputy head of the Dubno region council Oleksandr Kozak, the family of the lost soldier, teachers, pupils of the school and local residents. 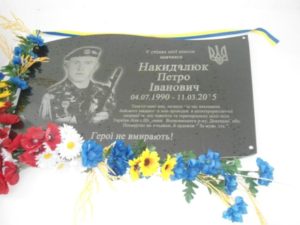 (from the farewell letter of Petro Nakydaliuk)

a tear appeared and melted.

Short lines are greeting from another world:

“In case, mother, of my death…” Bells are sounding,

these are memorial bells after her son.

A heart remembers the lines:

“Finish our house…”Winds are tired

of swinging the emptiness all night. Trails are tired

of waiting the son. But days

won’t return the child to the mother. He has already expired.

As a white angel, he raised to the sky. The letter of the hero:

mother’s grief, pain and anxiety. A will for live people

and a primordial pray to the God.