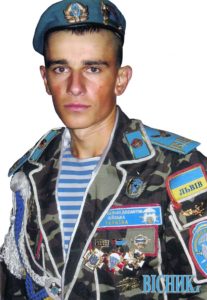 Petro Polytsiak was born on July 5, 1992, in the village of Bobryn, Mlyniv Raion. He studied at the local secondary school. Petro lived in Dubno from where he was drafted into the Armed Forces of Ukraine. The cyborg served in the 80th Air Mobile Brigade. The hero had a code name “Chornyi” (“Black”).

Before going to the Zone of the Anti-Terrorist Operation, Petro worked as a builder and was about to get married.

His relatives weren’t receiving any information about him for a long time. The connection with Petro was lost after the explosion in Donetsk airport. He wasn’t in the list of captives.

Later, it became known that the body of the soldier was delivered from under the ruins to the morgue of one of Dnipropetrovsk hospitals. Petro Polytsiak died on January 20, 2015.

According to the Presidential Executive Order №282/2015 on May 23, 2015, Petro was posthumously decorated with the Third Class Order For Bravery “for personal courage and high professionalism demonstrated in the protection of the sovereignty and territorial integrity of Ukraine and loyalty to the military oath”.

He was also posthumously awarded the Medal for the Defense of Donetsk Airport.

My son was tortured! – heartfelt cry of Petro Polytsiak’s mother , whose dead son was a cyborg (Ukrainian: кіборг, translit. kiborh was used to refer to the Ukrainian defenders of Donetsk airport)

Life of 22-years-old Petro was taken away by the frigging Donetsk airport. The warrior in the group of 80th airmobile brigade fighters fought till the end in the new terminal of airport. On January, 20 the boy connected to his relatives for the last time. After that there weren’t any news from him. And almost in a month his mother got a frightful message saying the body of her son’s lying in Dnipropetrovsk morgue.

Relatives of the soldier went to Dnipropetrovsk and on February, 20 the body of the Hero was delivered to Bobryn. And he was buried the next day, just at that time, when requiem for those lost heroes of Heavenly Hundred (killed protesters during Euromaidan) took place in Dubno.

The funerals of Ukrainan defender was announced, when he was already buried. Habitants of Ploska called to our office and informed us of this sad information. They told, that Petro was our countryman, from Dubno raion. Ploska is his mother’s homeland, that’s why the boy grew up here bringing up by his grandfather. He was mobilized via Ploska Village Council in August, 2014. Petro was on earnings in Kyiv at the time when he was called to get call-up papers. And he came and got it. The man of very kind and sincere soul said: “Necessary means necessary!” And he went to meet his frightful and fierce death. He was tortured in a captivity. They say even his eyes were taken out. People helped us to contact to Vira Mykolaivna, Petro’s mother. They were outraged of the fact that the Village Council hadn’t sent a funeral wreath.

Petro’s mothers agreed to tell everything she knew about her son’s death in condition the magazine would write her story fully. Here her mournful words:

– What should I say to you, dear people? My sonny is gone. The heir is lost. He was my only boy. I’ve also got four girls, but son was only one, and he’s taken away. As it was necessary, they found him even in Kyiv and identified his telephone number in the Village Council, because call-up papers were necessary to hand. Somebody would get out of military duty, but he was infallible child, that’s why Petro attended them and arrived.  He’d got pneumonia being in military registration and enlistment office, I told military commissar that. And the commissar answered me: “We will sort it out”, and pulled Petro with him.  He’d been on service since August, 12. But when Petro was being buried nobody from Ploska Village Council or Dubno military registration and enlistment office was present there. There wasn’t any wreath from them. He was needed them alive, but dead son is needed to his mother.

– Vira Mykolaivna, but how did Petro get to Ukrainian Air Assault Forces, maybe he’d been serving there?

– Yes, he had, in the same brigade. And in that winter they went to Donetsk airport. What did you fight there for? For the heap of concrete? There had been already nothing, when they got to the airport. Oh, how they’d been tortured, poor things. They slept on the frozen cement without flea-bags without anything. If the only reason was cold… They were being killed there every day. n the distance of half an kilometer Petro with another fellow carried a warrior, whose jaw and throat  were tore up. That injured boy was shown on TV.

So those were my Petro and his fellow who took this injured boy away. That guy, which helped Petro, was also scotched, so he also needed to pull him back. They brought him to separatists and ask them for help. When their commander noticed Petro had come without a body armour, said to him, that he is brave soldier and gave cigarettes. And my son said “I don’t smoke”, then he gave him a chocolate. That night he yelled asking for help on radio set. They didn’t get it. If only they had been given a help, he and the another guy would have lived.

– How did your son perish?

– I have no idea. We were called and said to arrive in Dnipropetrovsk in order to take a body away. But what happened, who had brought him there, where from, there weren’t any information.  I hoped to the end. I thought, it wound not be him. When I arrived and glanced – my heart stunned. That was him! My sonny was lying with beaten body, wearing only berets and lower trousers. And nothing more. Indeed, watch and silver chain were at him. Watch was broken. I don’t know, who killed my son and undressed him – whether stranger or our warriors. There were a lot of thoughts in my mind. Other dead soldiers were given to their relatives dressed. Why he was undressed?  They said he was leaned with flags, but it’s impossible to be so damaged with a flag. His face was clean with only injury near his eyebrow.  Flaying his body, I found numerous bruises on. Let somebody disagree with me, he hadn’t been lying under flags for a month.  His body could not be saved for so long. And he lost weight a lot.

Evidently, he lived suffering from hunger and was beaten.

– Sorry for a sore subject, but there is  a rumour after the funeral, that Petro’s eyes were  taken out.  Because his eyelids fell on the very eye ground.

– That’s a lie. His eyes were not taken out. They were knocked out with a brass knuckle. One was knocked out, and the second was knocked inside. My sonny was tortured. And I don’t who did it and why. Maybe, he said something wrong. Only God knows what happened to him. Thanks God, his body was come back home. Petro was buried on Homeland. So I can come to his grave.

– Do you know that the state must pay you a manual?

– I do. Money couldn’t replace me a son. And will it be given? Abstrusely, whether they’ll admit will that the son perished on the war.  Maybe, they spare money. Let it be so.  I will not try to get this money.

– But you should bring children up. Your son is Hero, who perished for Ukraine, and the state must help your family with money though, if it did not manage to protect him.

– What is to happen, that’ll happen. I wish such grief wouldn’t happen anymore. I’m praying for peace. Let the mothers be not brought their dead sons.

Pray you all. It’s such a terrible grief – to bury our children. He’d better be without arm or leg, but survived. Pray for peace in  our country. Ukraine lost another son – Petro Polytsiak, who was a martyr and a lucid man. May he  rest in peace.