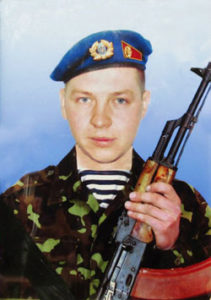 On April 10, 2014, Petro was conscripted into the Armed Forces of Ukraine in the 51st Mechanized Brigade in the city of Volodymyr-Volynsk.

The private soldier Petro Bilets of the 51st Mechanized Brigade was last heard of on August, 28. Petro died in the battle outside the town of Ilovaisk on August 29, 2014, during the departure from the Ilovaisk pothole through the so-called “green corridor” near the village of Novokaterynivka. On September 2, the body of the soldier together with the bodies of other 97 deceased was delivered to the morgue in the city of Zaporizhzhia. Petro Bilets was identified by his comrades and relatives.

According to the Presidential Executive Order № 473/2015 on August 13, 2015, Petro was posthumously honored with the Third Class Order For Bravery “for personal bravery and high professionalism, demonstrated in the protection of sovereignty and territorial integrity of Ukraine, loyalty to the military oath”.

This fall is sad and is full of anxiety for our land, where fighting is taking place

A deep sorrow has filled our land since the early spring when the men were began to call to the army. But then there was a hope that everything would end in peace. And it would happen very soon. We were waiting and hoping. We supported our soldiers as much as we could. And we felt an inexpressible moral pain when we buried the dead. I also remember May’s mourning in Rokytne and Osnytsk villages. And then, there was the mourning on July in Blazhiv. And now it is the September mourning in the village Netreba … I am looking at the pictures of the guys. I remember them all. I see them alive. I think about Peter Bilets, with whom I also got acquainted on the Mykolaiv firing range. He was upset on the day we arrived. He became cheerful, like most soldiers, after he wore body armor. It’s not just saying that body armor has also the psychological ability to protect a person. So, on the photo Petro is in the first row, in the center, with a sincere smile (in the newspaper “NR” # 47/48 dated June 19, 2014). Even after his death he stayed in my memory with such sincere smile…

He fell in the battle on the first of September. His relatives were informed about the tragedy much later. Mother went to take away the body of his son. It is told that she recognized him by a scar on his face, and also by the photo of his bride, which the man carried in a pocket of his pea jacket. He dreamed of marrying. But it was not on the cards. Somewhere in heaven, it was written another, more tragic fate for him. There was no wedding. Instead of that his funeral at the age of 28…

His native village was farewell to their dead soldier on September 23. On that mournful day, clouds thickened over the village Netreba and a chilling wind blew. The impression was that even the nature felt sorrow for a young dead soldier. It can’t be described how his relatives, friends and felt themselves. And what can be said about the feelings of his wife… The heart clenched to see the burial service. Every word of the priest deeply penetrated into the heart especially that today the holy land will receive the body of the deceased. And his soul after the hell war will go to the kingdom of heaven and there will join the army of Heaven. And that all of us must pray sincerely for the deceased and for peace in Ukraine, because, as it say, sincere prayer and faith will overcome all troubles and misfortunes.

With the military orchestra background the coffin of a killed soldier was carried, a long way from home to the cemetery. All the villagers, from young to old, followed to his grave. Ahead of the mourning procession was the bride with a portrait. Comrades-in-arms from neighboring villages gathered at the funeral of a friend and a delegation from the district arrived. The novissima verbe on the cemetery were again spoken by the priest. He thanked his mother for the upbringing of her son, who gave his life for the calm in the country. The spiritual mentor said that our country never wanted a war. There is no blood on the flag of Ukraine. There is only blue color on it, which symbolizes the peace, and the color of the ears, which means that our people are the perennial farmers. And only black ribbon speaks of sadness as a sign of mourning for the dead… The church choir sang Oratio Dominica. The orchestra performed the hymn of Ukraine. There were military salutes. People bid farewell to a warrior who gave his life for saving the lives of others…

There is no sadder reason than funeral. There is no more tragic event than the war. It can be described in words how sincerely we pray God to send calm to our peace-loving land, so that our soldiers shouldn’t gave their life. We are asking for mercy for Ukraine. Lord Jesus Christ, have mercy on us.