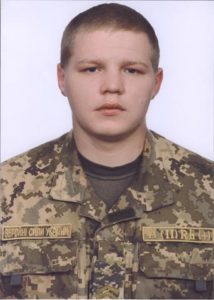 By the Decree of the President of Ukraine No.522 / 2016 of November 25, 2016, “for personal courage and high professionalism, revealed in the protection of the state sovereignty and the territorial integrity of Ukraine and loyalty to military oath,” he was awarded a medal for “For military service to Ukraine” (posthumously).

On the knees, with flowers and tears – Rivne region met the body of the soldier Roman Svirzhivskyi

Resident of Kornyn village, Rivne region, Roman Svirzhevskyi died in Luhansk region, on May 1, 2016. On May 3, his body was brought to his homeland. This is the first dead soldier from Cornyn village.

Nearly a thousand of people came to meet their fellow countryman, the defender of Ukraine Roman Svirzhivskyi, there were fellow villagers, friends, acquaintances and passers-by, who met an autoclone with the body in front of them with tears.

There also was Olga Dragan among them – the Roman`s from 5 to 11 classes class teacher:

“I remember him as a lively, athletic guy. Always fought for honesty and justice. He had dreamed of being a military or a firefighter ever since childhood. After finishing school in 2012 he went to the army, served, and when the war began, became a contractor. At 19 he was already in the war. After the concussion, he returned home, but did not conceal the desire to return to war again. And he said: “My guys are over there, I’ll go”. In the morning of May 1 he congratulated mom with Easter by phone. And in the afternoon his phone would not answer any more.”

The teacher and principal of Kornyn secondary school – Borys Pasichniuk has also nothing but praise for Roman Svirzhevskyi: 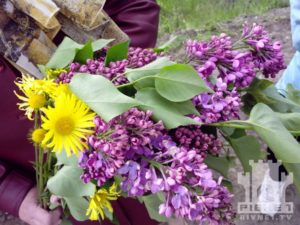 “Roman was an ordinary guy, very responsible. A person with a good character who was loved in class. It is a pity that this happened, we were shocked when we got known about the grief. This is a terrible loss for the family and the fellow villagers. Last year, on Remembrance Day, on May 8, Roman attended the festivities in the village, and was invited to a speech. He was very disappointed, hesitant, and said: “It’s better for me to stand on the checkpoint than speak words.” Roman always repeated that he would never leave the State and family and would fight for them. His mother became a volunteer during the war, and the whole village community supported these undertakings. ”

Young boys set a huge Ukrainian flag along the way. There are the villagers, a comrade, and a neighbour  – Mykhailo among the young people:

“It’s disgraceful that the young man died, did not live, did not marry, did not have a family. It`s a pity.”

Also during the “living corridor” there was a crew of the Rivne Patrol Police and a carriage of ambulances. The policemen followed the rule of law, parking and free entry to the village, as they expected a large number of car accidents. In turn, the doctors monitored the health of the people, and the doctor from the Kornyn ambulatory department was constantly staying with Roman Svirzhevskyi`s mother during the day.

The fellow countrymen met the body standing on their knees, but without holding back tears. Hero’s road was invested with flowers.

Farewell to Roman Svirzhevskyi will be held tomorrow, on May 4, in the village Kornyn, Rivne district. 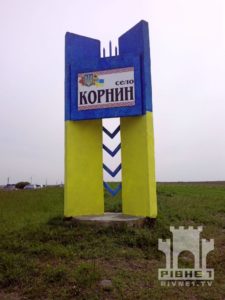 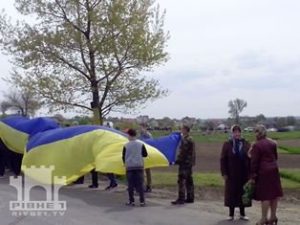 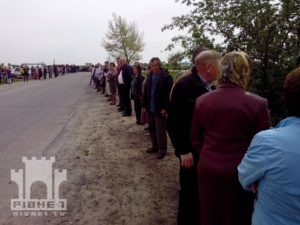 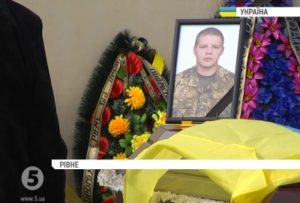 Sergeant was killed at night against May 1. Roman served as a communications officer in one of the military units of the operational command “West”, based in Rivne. There, the relatives, friends and colleagues farewell the hero.

Roman Svirzhevskyi signed the contract with the army after three year serving. He went to the ATO area several times. The boy will be buried tomorrow at noon in his native Kornyn village, Rivne region.

“Roman was a responsible guy, for this he received the rank of junior sergeant, he was put on a command post, had the commander’s qualities. He was respected in the team, appreciated, you saw by yourself how many friends came to hold him on the last road today”, – said Andrii Baziuk, the military commander of the operational command” West “of the Armed Forces.

Recall, on April 26, Mykolaiv said goodbye to the senior soldier of the 54th Brigade Igor Shavriev. On April 23, he died of serious injuries which he had got during a combat mission in the East of the country. The relatives, his brothers in arms and passers-by people came to say good-bye to the fighter of the 54th Brigade

“Chamomile, a cute and light child” – Rivne residents are struck the death of a 21-year-old fellow countryman in the ATO area

The deceased 21-year-old Roman Svirzhevskyi was buried today in the village of Kornyn near Rivne.

Recall that the guy died on Easter. Facebook social network users from Rivne did not hold back emotions, expressing condolences to parents and indignation of the death of a young man:

Viktoriia Shynkarenko. “We met the Hero today. A young boy, Roman Svirzhevskyi, a Chamomile, a sweet and bright child, who was afield from 19. The grief of the mother who does not want anything any more, the father who keeps courageously, and the sister who is in despair. And any words, that he went to the Light Holy Easter, won`t comfort them … It is very difficult to lose those whom you know well. Photo exactly a year ago. Here he is a cute boy, but a year later – he is in a closed coffin … I have buried my grandmother today, she lived for 90 years, it’s natural, although it is very unfortunate, and this little day star was only 21 and he only began to live. It is unrealistic difficult”.

Sergiy Orel. Have a rest with the world, a young Cossack, sorry not to be saved, we will be punishing them all their lifetime, there will be no forgiveness, neither in this world nor in that. GLORY TOGETHER.

Aleks Trambon. Someone dies of old age, someone from bad habits, illnesses, accidents, and death of a man, a hero, must be deserved from God. Chamomile, you are eternal !!! 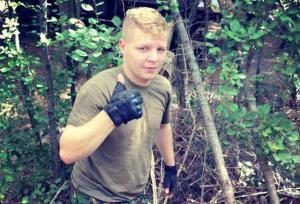 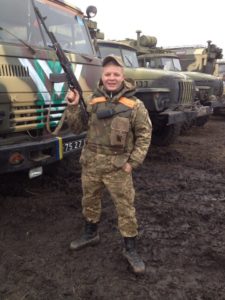 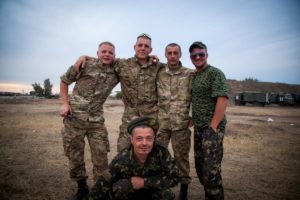 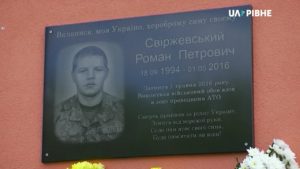 On May 8, on the Day of Remembrance and Reconciliation on the Facade of the Kornyn Secondary School, I-III, a memorial plaque to the deceased fellow villager in the zone of the ATO Roman Svirzhevsky was presented.

Kornyn village chairman Roman Horbatiuk-Vasyileiko, deputy of the district council Anton Kuzmich, fellow villagers, teachers and schoolchildren, residents of the Kornyn village council have come to recall Roman`s feat, to express their condolences to the relatives of Roman. 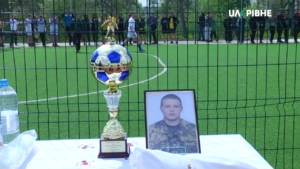 During the visit to the memorial plaque flowers were laid, and the memory of the deceased Hero was given a minute of silence. Roman Svirzhevskyi was born in 1994, junior sergeant, served in the 55th Rivne separate brigade of communication. Svirzhevskyi Roman Petrovych died on May 1, 2016 during a combat task in the village of Lower Duvanka, Lugansk region. 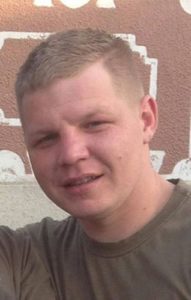