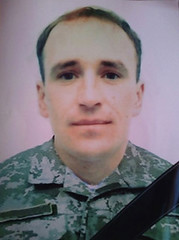 from 1992 to 1994, he learned a trade of a cabinet-maker, builder, and carpenter in Rokytne Vocational School. Ruslan had jobs as an unskilled worker in private companies.

However, according to the Decree on Partial Mobilization, he was conscripted into the Armed Forces of Ukraine on July 20, 2015, to defend the borders of the country.

He did military service in the village of Yelyzavetivka, Donetsk Oblast.

Ruslan died in the Raion Hospital of the town of Kurakhove, Donetsk Oblast, on March 12, 2016. He left a father and an adult son. Ruslan Klymenko was buried in the rural town of Rokytne, Rivne Oblast.

Ruslan Yuriiovych Klymenko was born on September 8th 1978 in the town of Rokytne. From 1985 to 1992 he studied at Rokytne Secondary School #1.

During 1992-1994, he got a profession of woodworker, builder, and carpenter at Rokytne Vocational School. He worked as a handyman at private entities.

On July 20th 2015, he was mobilized to the armed forces of Ukraine. He served in Yelyzavetivka settlement of Donetsk region. On March 12th 2016, Ruslan passed away in the district hospital of the city of Kurakhove (Donetsk region). Left behind a father and an adult son.

In the zone of ​​anti-terrorist operation, soldiers from Berezne district and Rokytne district have perished

Today, on March 14th, during his service in the ATO zone, a 41-year-old Ivan Melnyk, a military from the village of Sovp of Berezne district, has passed away.

Staff sergeant was called for service in the armed forces of Ukraine in March last year. Since April he has served in Lugansk region. The defender’s mother lives in Berezne district. The date of the burial has not yet been determined; the issue of transporting the body of the military man to the homeland is currently being solved.

The military was mobilized in July 2015, served in the ATO zone near the village of Yelyzavetivka of  Donetska region.  Ruslan Klymenko was born on September 8, 1978. He lived in Rokytne town. His father and son now will livw without him. The 15-16th of March are declared as days of mourning in the district. The memorial service and the burial of a soldier will take place on March 16th in the town of Rokytne.

The officials of Rivne Region State Administration express condolences to the families of the defenders.

So the moment of farewell has come:

from this moment and forever, we will never see You alive in this world …

In the spring of 2016, Rokytne received tragic news from the country’s east again.

On March 12th, our combatant died in the Anti-Terrorist operation zone.

All those who knew Ruslan Klymenko were filled with sorrow and sadness. I also knew him personally. He was born in the town of Rokytne, but most of his life lived in the village with his grandmother. Here he met his fate once, and here he was buried…

On the day of the burial, although it was cold, the weather was sunny. It is said to shine on good people. As far as we remember the deceased, he was incredibly kind. They say such people have a very difficult life. And there’s some truth to it…

Ruslan Yuriiovych joined the Anti-Terrorist operation zone to serve voluntarily. In the summer of 2015, he arrived in the district military registration and enlistment office with a firm intention to protect the country. He was mobilized on July 20th of the same year. For seven months, our countryman served uninterruptedly, faithfully fulfilling the tasks assigned to him.

On March 12th, Ruslan Klymenko passed away … And on March 16th, all the inhabitants of the village said goodbye to him. He was mourned by his family, his neighbors, his sworn brothers, friends, classmates and grandmother he grew up with, whom he helped in everything and from whose yard he was buried. He wasn’t mourned by his mother, unlike all the fighters are. She had passed away two years before. And because of this it felt even worse …

… To the sounds of the brass band, the funeral procession headed from the yard. Transport stopped along the road, people were standing, sadly escorting the soldier to his final resting place, wiping unwanted tears. The coffin with the body of the deceased, according to military canons, was carried by hands.

And then there was a touching funeral service, which was performed by the prior of the Holy Assumption church of  Rokytne town, Arch-priest Joseph. “There is no greater love than to die for their friends,” said the father, “and our warrior died for the whole country, proving his love not with words, but with life. And this is a great feat, because God himself gave life for all of us. ” And Father Joseph said that today the deceased is no longer asking his father for forgiveness for disobeying or for being guilty once by himself (as is sung in the funeral hymns). And that the deceased says goodbye to his son, who should be proud of him, because he defended peace and tranquility.

And that we all have to be proud of our fellow countryman and thank him for the silence in our region. And that our prayer will be the most necessary thing for him these days…

From the temple we escorted a soldier to eternity. What a long time to us, alive, seems a way to the cemetery. And then there were the last rites of the church choir, the mournful speech of the head of the district administration Mykola Kushnir, painful farewell, the State anthem, military salutes and burial …