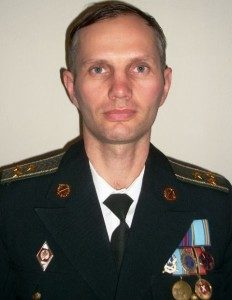 Yurii was born on March 12, 1974, in the town of Iziaslav, Khmelnytskyi Oblast. He finished Iziaslav Secondary School №1.

Yurii Tsisaruk started his service in the Armed Forces of Ukraine in 1992. During this time he occupied various posts from the commander and to the chief of intelligence management of rocket troops and artillery at The West Operational Command. During recent years, the officer served in Rivne Oblast.

In the ATO Zone, Yurii was a chief of intelligence management of rocket troops and artillery of The West Operational Command. For the period from July 2014 to July 2015, Yurii took part in the battle actions.

On July 12, 2015, while performing combat tasks in the ATO Zone Yurii, together with another serviceman, while covering their fellows, were blown up on the trip wire near the village of Novotoshkivske, Luhansk Oblast. He died from the injuries.

Yurii left his wife and a 15-year old son.

Yurii was buried in the town of Iziaslav, Khmelnytskyi Oblast, in the place where he was born.

According to the Presidential Executive Order on July 12 2015, Yurii Tsisaruk – a Chief of Intelligence Management of rocket troops and artillery of The West Operational Command was posthumously awarded the Second Degree Order of Bogdan Khmelnitsky “for personal courage and high professionalism demonstrated in the protection of sovereignty and territorial integrity of Ukraine, loyalty to the military oath”.

On September 17, 2015, Rivne City Council conferred Yurii Tsisaruk with the title of the Honorary Citizen of Rivne.

A professional officer, a good person, a loving husband and father … This is what perished in the ATO zone 41 year old the head of intelligence of the control of rocket troops and artillery of the Operational Command West, Colonel Yurii Mykolaiovych Tsisaruk is remembered by his comrades in the service. On July 12, the officer perished while performing combat mission in Luhansk region. Now the arrival of cargo-200 is being waited with anxiety and sadness in the military unit in Rivne, and today the farewell to the deceased will start from 3 p.m. And tomorrow Yurii Tsisaruk will be buried in his hometown Iziaslav, in Khmelnytsky region. As the head of the OC West press center Anatolii Proshyn told, Yurii Tsisaruk had begun his service in the Armed Forces of Ukraine on August 1, 1992.

The website “VSE” also conveys its condolences to the family of the deceased officer. Heroes do not die! 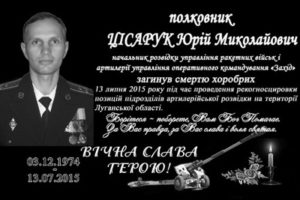 On November 3, 2015, on Day of Missile Forces and Artillery of the Armed Forces of Ukraine, the commander of troops of the OC West, Major General Ihor Dovhan, together with the Colonel’s son Vitalii, opened a memorial plaque on the bilding of the control of rocket troops and artillery of the Operational Command West, where the deceased worked.

On October 14, 2015, the Memorial board was opened in the center of Rivne next to Holy Resurrection Cathedral and the city’s charm – column of the Virgin.  The photographs of sixteen perished ATO soldiers from Rivne and of three Heaven’s Hundred Heroes are on the board. 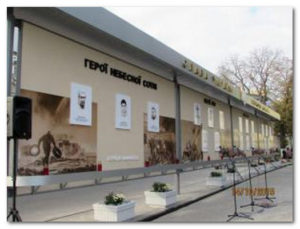