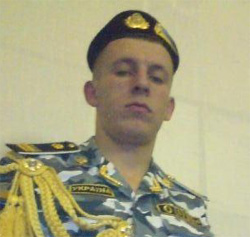 Vitalii Marynych was born on February 2, 1992, in the village of Rokytne, Rokytne Raion, Rivne Oblast. From 1998 to 2008, he studied at Rokytne Educational Complex “Comprehensive School-Lyceum”. In 2008, Vitalii entered Rokytne Vocational School which he graduated in 2010 obtaining the qualification of a bricklayer-stove maker, plasterer. In April 2010, he was drafted into compulsory military service, which he did in the military base of the Military Institute of Telecommunications and Information Technologies of the National Technical University of Ukraine “Igor Sikorsky Kyiv Polytechnic Institute” (MITITNTUU “KPI”) in Kyiv. In April 2011, Vitalii was transferred to the reserve from the position of the mechanic of automobile subdivision of Minsk Tractor Works (MTW) Platoon. From September 2012 to February 2014, he worked in Rokytne Fire Department.

On April 10, 2014, Vitalii was called up into the ranks of the Armed Forces of Ukraine. He was a soldier and reconnaissance officer of the 51st Mechanized Brigade.

The circumstances of the death: around 6 a.m. between Olhynka and Volodymyrivka near the town of Volnovakha, the subversive terrorist group attacked the detached unit of the Ukrainian soldiers. According to the eyewitnesses’ account, separatists arrived in two armored cars and two off-road vehicles and opened massive fire from grenade launchers, MANPADS, and machine guns. During the shelling one of the shells hit the combat vehicle, which stood at the checkpoint. It caused the explosion of ammunition equipment. As a result of the battle, 17 military officers were killed and many got injured.

Vitalii died on May 22, 2014, in the battle with terrorists near the city of Volnovakha.

According to the Presidential Executive Order № 311/2015 on 4 June 2015, Vitalii Marynych was posthumously decorated with the Medal for the Defender of the Motherland “for personal courage and high professionalism demonstrated in the protection of sovereignty and territorial integrity of Ukraine, loyalty to the military oath”.

Woe is our common

For the inhabitants of the Volnovakha district of Donetsk region the spring day of May 22 began with a terrible news. 10 kilometers from the city of Volnovakha, near the village of Olhynka, there was a bloody tragedy. In a peaceful area where administrative institutions, banks, polling stations were not occupied, where for a long time the yellow-blue flags and billboards with the inscription “United Ukraine” were hanging, where local people believe the local authority, young boys died. They died not in battle, not attacking anyone, but during the protection of civilians at one of the checkpoints. These were the fighters of the 51st mechanized brigade of the 13th Army Corps of the Armed Forces of Ukraine, which was stationed in Volodymyr-Volynskyi of Volyn region.

At dawn the fire was launched on the military part from small arms, manual anti-tank grenades and mortars. The fighters arrived on jeeps and cruelly dealt with the soldiers. During the fire, one of the charges hit a military vehicle, which was at the checkpoint, which caused an explosion of ammunition.

When it was over, the frightened residents of the surrounding villages were afraid to leave their homes, but there were daring people who, on scooters and cars, arrived at the battlefield and began to rescue the wounded. In the meantime, from the Volnovakha, ambulances rushed, which, together with the locals, began to transport the victims to their hospitals on their own vehicles.

The Volnovakha Central District Hospital immediately received 28 wounded and 6 were taken to the Volnovakha Hospital Station. A real struggle for lives began. Injuries to the head, internal organs, limbs of hands and feet, loss of blood, shock state of the fighters – doctors and nurses selflessly took over all these.

From the first minute of the arrival of the severely injured to the offices doctors-surgeons and traumatologists, anesthetists began to do operations and other actions to save the wounded. These are doctors: V.G. Novikov, Ye.M. Ilinov, I.I. Lisovyi, I.O. Verveiko, O.F.Stronova and many others. Urgent specialists were called from Donetsk, who took the worst fighters to the neurosurgical department of the regional hospital. Due to the high professionalism and mercy of Volnovakha doctors, nurses, the sanitarians many soldiers managed to be saved. In the next two days they were sent to more specialized institutions – military hospitals in Dnipropetrovsk and Kharkiv. Also the people of Volnovakha remained empathic. Blood, medicines, clothes, linen, food were immediately brought to hospitals by entrepreneurs, teachers, railwaymen, pensioners.

Sixteen fighters fell on the Donetsk land. With deep sadness, I learned that among the dead there are my fellow countrymen. Andrii Nechyporuk, driver-sanitary technician from Bronnyky of Rivne region and reconnoiters Leonid Ozeranchuk from Osnytsk and Vitalii Marynych from village Rokytne.

Did young boys think that they would die so far from their native Polissia? Do any of us want this foolish war that takes away more and more human lives to last?

Forgive us, Volnovakha mothers, who have not saved your sons. Forgive that we pay such a price for the lives of strangers. Volnovakha is in sorrow. We will not forget the guys from Rivne and Volyn. You will always be in our hearts. Eternal memory to the heroes.

Forgive me, Mom, for a black scarf.

For you will be alone from now

I love you and I love Ukraine

She, just like you, was the one in my heart …

teacher of Ukrainian language and literature

of Volnovakha Lyceum of Donetsk region

In Rokytne, a commemorative tablet was established to a rescuer who died under the Volnovakha

Vitalii Marynych was only 23 years old. 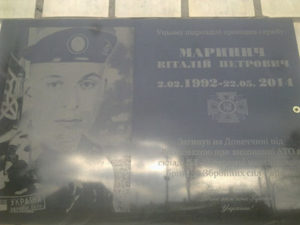 23-year-old Vitalii Marynych has been working as a fireman-rescuer for more than a year in the 10th state fire and rescue section of Rokytnivskyi district. Released in February this year, the boy decided to fulfill his civil duty – he came to the local military office and was soon sent to the east of Ukraine as part of the 51st separate mechanized brigade.

Vitalii was killed during a combat task on the night of May 22 under the Volnovakha in Donetsk region. Between Olhynka and Volodymyrivka near the city of Volnovakha an assault on a Ukrainian military detachment was committed by a sabotage-terrorist group. According to eyewitnesses, the fighters arrived on two collector cars and two SUVs, opened a massive fire with grenade launchers and MANPADS, machine guns. During the fire, one of the shells hit the military vehicle, which was at the checkpoint and it caused an explosion of ammunition. As a result of the battle, 17 soldiers were killed and many injured. 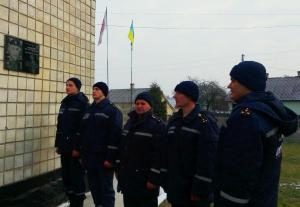 Workers of the Rokytne district of SNS sector, with their own efforts, installed a commemorative tablet to the rescuer-colleague – the youngest sergeant of the civil protection service Vitalii Marynych on the facade of the 10th state fire and rescue part of the village Rokytne. On behalf of the chief rescuer of the area, Colonel of the Civil Protection Service, Sergii Kruk, colleagues-rescuers in every way help the family of the deceased hero in solving social and domestic problems.

This is reported by the State DPSU in the Rivne region.

On May 22, 2014, near the Volnovakha, 18 military personnel of the 51st separate mechanized brigade were killed in a terrorist attack. Among them was Marynych Vitalii Petrovych.

In Volnovakha, a commemorative tablet was installed for the dead soldiers of the 51st brigade. 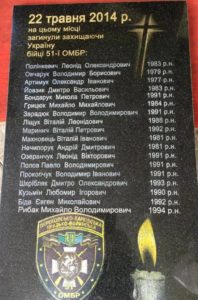