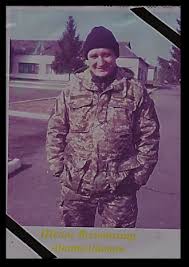 Volodymyr Sheliah was born on April 3, 1979, in a large family in the village of Khynochi, Volodymyrets Raion, Rivne Oblast, where he lived. Volodymyr worked as a teacher of physical education in Khynochi Secondary School. Earlier, Volodymyr worked as Principal Deputy of the Krasnosilsk and Stepanhorod Secondary Schools. From 2010 Volodymyr was a head of the hobby group of sports and touristic profile at the Rafaliv Center of Children and Youth Creativity.  According to the words of fellow countrymen, Volodymyr was morally sustainable, fair, very cheerful and friendly man. Furthermore, he was a consummate organizer, an active participant of amateur art activities.

On February 5, 2015, during a partial mobilization, Volodymyr was called up by Volodymyrets Raion Military Registration and Enlistment Office for military service in the Zone of ATO. As part of his subsection, he covered one of the most important Ukrainian army outposts on the line of dividing – village of Mariinka, Donetsk Oblast.

On June 3, 2015, a soldier-scout got injuries incompatible with life.

Volodymyr is buried in the village of Khynochi of Volodymyrets Raion, Rivne Oblast.

He left his mother, two sisters, and three brothers.

According to the Presidential Executive Order №573/2015 on October 10, 2015, Volodymyr was posthumously decorated with the Third Class Order For Bravery “for personal courage and high professionalism demonstrated in the protection of sovereignty and territorial integrity of Ukraine, loyalty to the military oath”.