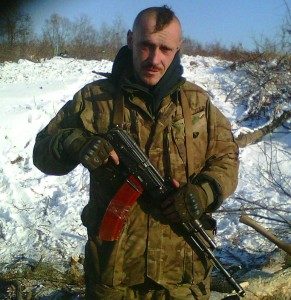 Tit Volodymyr was born on May 26, 1980, in the village of Snovydovychi, Rokytne Raion, Rivne Oblast.  In 1986, Volodymyr went to the first class of Snovydovychi Secondary School, where he got the incomplete general education.

In 1995, he entered Sarnny Vocational School №38, where he obtained the major of a plumber-gas welder. In 1998, Volodymyr was called up for active military service to the Armed Forces of Ukraine. He held the service in the city of Simferopol, Military Unit A-2209 7, Crimea Division of the National Mineral Resources University for 1.5 years.  After the army service, Volodymyr continued his study in Rokytne Vocational School.

In 2001, Volodymyr worked as a gas welder in Ukrainian Wood Processing Company “Roksolana”.

In 2015, Volodymyr got an anti-personnel injury of the right hip. Due to the constant attacks during two weeks Volodymyr laid in trench shelter.

After the injuries, he received a vacation for 10 days and was treated in Rokytne Central District Hospital, with the diagnosis of an open ulcer.

The Memory of a Soldier

He was from Snovydovychi. Volodymyr Tit was mobilized to defend the eastern borders of Ukraine with his twin brother in August 2014. At first, they were sent to Donetsk region as a part of the 51st Volyn mechanized brigade. Later, when the 51st brigade was disbanded, Volodymyr and Oleksandr Tits returned to Western Ukraine to undergo battle training at the Yavoriv firing range in Lviv region. After this the young men as a part of the 24th mechanized brigade were sent back to the front line. At first the place of their service was Lysychansk, Luhansk region, and then one of the hottest points of the region – the village of Krymske. Constant shelling, the movement of enemy columns, which were allowed only to observe… In short, all the horrors and hardships of this war fell to our countrymen lot. Separatists were from them at a distance of 1.5-2 km. For the most part, there were no provisions. As Oleksandr Tit says, they rarely saw bread. There wasn’t even enough water so they had to melt snow… There is such bitter reality. In addition, they had been serving invariably for almost seven months.

Volodymyr was a grenadier. In February 2015 during one of the battles he received a fragmentation wound of the leg. His grenade thrower was crushed… The victim was given only the first medical aid. And that’s all. He was not sent to any medical center… The wound healed up. And only after returning home he was rehabilitated in the Rivne hospital in April. As for the returning to Snovydovychi, it was as bitter as the service. The relatives tell that Volodymyr and Oleksandr were brought to Kharkiv, from which they had to get without assistance, that is, without money. The brothers got to their home with God’s and human help. And at home it was usual rural life. Volodia, as it was mentioned above, was treated in the regional hospital in April. But by the winter he began to feel bad again. This time the army “food” knew about itself. The man was bleeding. During the observation they found a duodenum ulcer. He took a course of treatment in Rokytne central district hospital. It was said that Volodymyr’s medical condition was better, he became more cheerful and bright. But, unfortunately, not for a long time…

He died of a developed blood clot suddenly on December 25, 2015. On December 26, Volodymyr Tit was buried by the whole village. The representatives of district authorities, ATO fighters from whole Rokytne district came to see him on his last journey. He was only 35. As relatives and friends of the deceased say, he was a bright and always smiling person. In his smile he hid his pain which sometimes was unbearable so he was, so he will stay in the memory of the relatives and friends forever.