As a result of mortar shelling near the town Krasnohorivka (Mariinskyi district, Donetsk region) he died on July 20, 2015. He left a mother, a wife and a little daughter.

He was buried in his native Malynivka.

By the Decree of the President of Ukraine № 291/2016 “for personal courage and high professionalism shown defending state sovereignty and territorial integrity of Ukraine, loyalty to military oath” Volodymyr Tomilin was awarded the Order “For Courage” of the III degree (posthumously).

The publcation about Tomilin V.Y.

Sky was crying with fluffy snow

Mothers, let’s honour the only son,

Let’s honour him because his wife was in love,

Grandmothers, let’s honour soldier but grandson who watch above!

On the 25th January in village Malynivka  a mass meeting on the occasion of inauguration of a memorial plaque of Volodymyr Tomilin took place. That day on the yard of the local school there were inhabitants of the same village as perished defender, his mother, grandmother, wife and daughter, combats that served with him in ATO zone to honour the memory of the Ukrainian hero. Besides, Yurii Kovalchuk, a head of district authorities, Oleksandr Polishchuk, a chairman of District Council, Taras Homeniuk, a vice-chairman of district authorities, Oleksii Savonik, a chief of the department of education, youth and sport, Anatolii Ivasiuk, a chief of the department of culture and tourism, Petro Zubkevych, a director of district Center of Employment, Mykola Panchuk, a settlement chairman of Goshcha, Olena Pyvovarchuk, a village chairwoman of Malynivka, took part in the meeting.

As long as the mass meeting was lasting, the sky was crying with large snowflakes. Despite of the foul weather several doves were floating in the skies. Probably, the souls of the hero and his friends came to see how the fellow-villagers mark of their honour, support his mother and grandmother, help his wife and daughter.

The commune gave the right to unveil the memorial plaque to the soldiers and members of ATO. They were Valerii Nesteruk, Yurii Nesteruk, Ivan Tkachuk and Valentyn Andriichuk from Voronov and Yurii Haponchuk. Then the song “Plyve kacha” started to fly above. There was no indifferent person on the square in front of school at that moment. The women and children were crying and men wiped stealthily avaricious tears. It appeared that the sky was going to fall in despair…

The participators of ATO gave a blue and yellow width to the wife of the deceased and the State Flag of Ukraine signed by their friends was given to the museum of Malynivsk school.

The song “Mother, Don’t Cry” performed by the group “Teren” sounded very keenly, achingly, disturbingly. And all the people presented on the meeting broke down and cried again.

The senior priest of St. Paraskeva church Father Serhii sanctified the memorial tablet to Volodymyr Tomilin. The presented people honoured the heroes of heaven troops with a minute of silence.

Let’s remember: heroes don’t die! They are here with us, on the Earth. They just sleep calmly. And as long as we are alive, the memory of them always live.

In Malynivka every day Volodymyr Tomilin from the memorial tablet everyday will meet and follow pupils, remind them that he gave his life for our living in peaceful and flowering Ukraine. Let’s remember about this. Let’s love Ukraine and be proud of being the Ukrainians.

Glory to Ukraine! Glory to heroes! 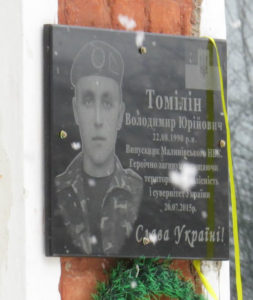 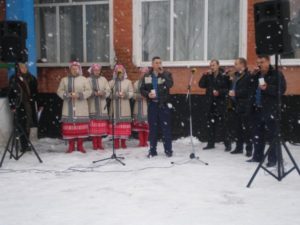 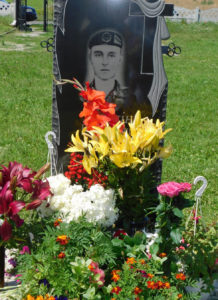