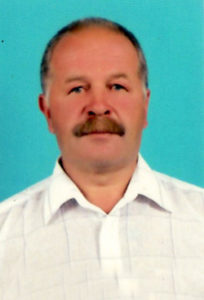 Yurii Itkaliuk was born on April 23, 1966, in the village of Rudleve, Mlyniv Raion, Rivne Oblast.  Having finished Vovnychi School, he entered Demydivka Vocational School №25 where he obtained a qualification of a tractor driver and an engineer. Yurii grew up without a father. Thus hard work of an agricultural worker lay on the child’s shoulders.

After military service, Yurii decided to become a serviceman.  He finished The School of Ensigns, served in Czechoslovakia, Kalininhrad and Odessa. Shortly after that, Yurii returned home. At first, he worked as a driver on a collective farm. Later he became a mechanic in a car fleet. In a happy family, Yurii raised two sons Ivan and Borys as true Ukrainians, diligent and hard-working people. He worked as a tractor driver in Vovnychi Village Council.

As a soldier and patriot, Yurii Itkaliuk was mobilized. After the training and the re-training in Yavoriv, Lviv Oblast, and Kryvyi Rih, he fought on the Zone of Counter-terrorist Operation in Luhansk Oblast. Yurii fought for his sons, wife,  calm and peace. He fought till his last breath.

The 48-year-old tank driver Yurii Itkaliuk died on February 4, 2015. His tank came under fire while accomplishing a combat mission.

According to the Presidential Executive Order № 282/2015 on May 23, 2015, Yurii Itkaliuk was posthumously awarded the Third Class Order For Bravery “for valor and high professionalism demonstrated in the protection of the state sovereignty and territorial integrity of Ukraine, loyalty to the oath of enlistment”.