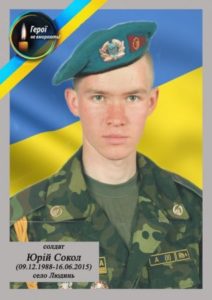 Yuri Sokol  was born on December 9, 1988, in the village of Liudyn of Dubrovytsia Raion in the family of workers. In 1995, he entered the first form of the Liudyn Secondary School and graduated from it in 2006. Up to now Yurii is remembered at school as a quiet, modest, and steady pupil. Since the early childhood, he showed deep concern and respect for people. In 2007, he joined the Armed Forces of Ukraine. Yurii served in the city of Vinnytsia. After returning from the army some time he went to work in Kiev and Kharkiv.

In 2013, Yurii worked at the plant “Torf Land Ukraine» in the village of Liudyn. On September 28, 2014, he was conscripted to the National Guard, held preparation in the city of Lviv.  A month later Yurii was transferred to the city of Kharkiv in order to continue learning. In October, he was at the checkpoint in Zaporizhia Oblast. Subsequently, on November 16, 2014, Yurii was sent into the area of Anti-Terrorist Operation in Luhansk Oblast, the village of Krymske, where he stayed until January 5, 2015. On Christmas holidays a young man had a three-week vacation, went to the meeting with students of the Liudynska School, had many conversations with friends and relatives. And of course, like everyone, have made plans for the future. Later on, Yurii had another vacation. Parents noticed that their son has changed – he became closed, rarely communicated with friends. He experienced tough times at the war. During these short, but long-awaited vacations, Yurii brought the gifts to his parents, whom he loved a lot.

On June 10, 2015, Yurii disappeared. His mother couldn’t wait for any more, so she went to visit her son but never saw him alive. He didn’t live till the end of the service just two months.

Yurii was buried on June 19, 2015, in the village of Liudyn, Dubrovytsia Raion, Rivne Oblast.

Dubrovytsia met the dead soldier on their knees 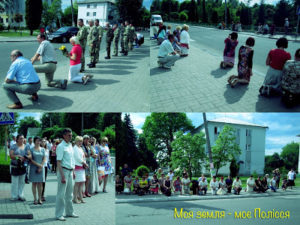 On June 15, 2015, there was a tragic event that shook Dubrovytsia. Our fellow countryman, the resident of Lyudyn village Yurii Viktorovych Sokol – a young and handsome twenty-year-old man who was the only son in the family died. The member of the anti-terrorist operation was buried on June 19, 2015 on the cemetery of his native village. The Day of mourning was announced in Dubrovytsia region, the village got dressed in the mourning tapes again and lowered the national flags.  About hundreds of local residents were meeting the soldier, the employees of the Dubrovytsia Regional State Administration, Dubrovytsia City Council, and some ordinary citizens who were not indifferent. People formed a living corridor and met their fellow countryman – a Hero of Ukraine! The car bearing the inscription “VANTAZH-200” stopped by the Dubrovytsia Region State Administration building, where the workers of the Dubrovytsko-Zarichnianskyi Commissariat, together with the military commissar, B.M. Mykulskyi, covered the coffin with the state flag of Ukraine.

Ukraine is torn by internal strife and external aggression of the prevailing enemy. It seems that we have well-trained National Guard of Ukraine and voluntary associations in the VUK, but the death is moving very fast. There are things that life doesn’t prepare us for. Of course someone may find out they have incurable illnesses, someone’s house is burning or close relatives are dying. And we think that this will never happen to us. Especially when our life is already happy and cloudless. We call all the residents of Polissia to unite and help the relatives of dead and injured in the ATO area soldiers. You should remember that life sometimes brings us gifts on a hot plate, which may be your plate. Later you will not have a possibility and time to understand what is really valued. Every day remember that you can make someone happy with your help. Let’s help the families of fighters and patriots who protect our Motherland! 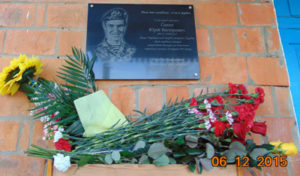 Another hero of the ATO has returned to his countrymen in marble. The memorial plaque was opened on the local school facade in the village of Lyudyn  with the assistance of the national deputy of Ukraine Vasyl Yanitsky on the Day of the Ukraine Armed Forces in memory of the National Guard soldier Yurii Sokol, who was courageously defending the sovereignty and integrity of Ukraine and died tragically in the military base in Kharkiv.

The head of the RSA Serhii Kyrkevych, the deputy of the Regional Council Vitalii Sukhovych, the assistant of national deputy of Ukraine Vasyl Yanytskyi Oksana Slobodzian, the head of Education Department of the RSA Nina Stasiuk, the head of the Department of Youth and Sports of the RSA Oleksandr Zadorozhnyi, Yurii’s fellow members from the Union of ATO Participants, deputies of the region council, volunteers, representatives of political parties, public activists, friends, classmates, relatives, pupils and teachers, fellow countrymen has come to honor the hero. 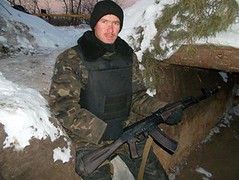 “Yurii will always remain a true hero in our memory,, because he did not hide from mobilization in Belarus or Poland, but went to defend the independence of his native land and to protect our peace,” said Serhii Kyrkevych at a meeting-requiem. – A simple Polissian guy has fulfilled his duty with honor, we are proud of him. Unfortunately, this war takes away the best sons of Ukraine. We believe that it will end soon and we will never mourn our warriors again. We bow our heads in respect to the parents for their son!…”

A regional mini-football tournament “Yurii Sokol’s Cup of Memory” dedicated to the hero-fellow countryman among high school students was held on the day of Yurii Sokol’s memorial plaque opening  in the Lyudyn Educational Complex gym. 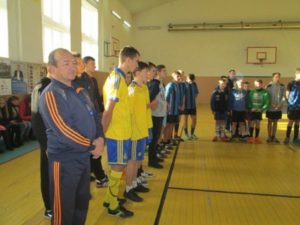 The competition took place on the school initiative and was sponsored by the deputy of the regional council Vitalii Sukhovych.

And I believe that we will defeat the enemy, because such defenders as Yurii are on our side in this war. He would live, build the country, raise children. But fate has decided differently. And our task is never to forget about these men who died for the sake of Ukraine, for the sake of our freedom. First of all, great gratitude to you, parents, for raising the son-hero. Glory to Ukraine!