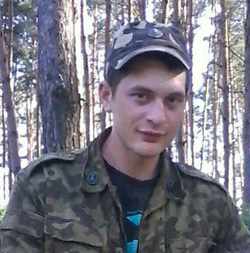 Mykola Humeniuk was born on May 23, 1993, in the village of Ptycha, Dubno Raion. He was a soldier and a driver of the 51st Mechanized Infantry Brigade. Mykola perished during the departure from the battlefield of Ilovaisk through the so-called “green corridor” between the villages of Katerynivka and Horbatenko. On September 3, 2014, the soldier’s body along with the 96 bodies of the other deceased was transported to Dnipropetrovsk. On October 16, Mykola was temporarily buried as an unknown hero at the Krasnopil Cemetery in Dnipropetrovsk. He has been identified thanks to the DNA test.

His place of burial: the city of Dnipropetrovsk, Krasnopil Cemetery, a burial plot №79.

Dmytro Momotiuk was born on September 19, 1991, in the village of Bereh, Dubno Raion, Rivne Oblast. In 1997, he was accepted in the 1st form of Bereh Educational Complex. Dmytro went in for sports and participated in the athletics and football competitions on the raion level.

After finishing 9 forms of Bereh Educational Complex in 2006, he entered Zolochiv Vocational School. Having graduated from it, Dmytro worked at a Publicly Traded Company “Rivne Piscicultural Ameliorative Station (PAS)”.

In 2009, he became a soldier of the Armed Forces of Ukraine, and on April 10, 2014, Dmytro Momotiuk was enlisted into Volodymyr-Volynskyi 51st Air-Mobile Brigade of the 3rd Battalion.

He died on the night of September 24, 2014, in the battle of Ilovaisk (Donetsk Oblast) near Kuteinykove. The 3rd battalion of the brigade was besieged near Berezne and Olenivka under constant shellfire.

According to the Presidential Executive Order #311/2015 on June 4, 2015, Dmytro was posthumously decorated with the Third Class Order For Bravery “for personal courage and high professionalism demonstrated in the protection of sovereignty and territorial integrity of Ukraine, loyalty to the military oath”.… Читати далі