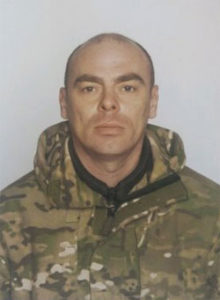 Oleksii Kirys was born on March 30, 1981, in the village of Smordva, Mlyniv Raion. Having finished Mlyniv Gymnasium of Liberal Arts in 1998,  he entered Rivne Institute of Water Management. Oleksii worked as a sales assistant in Technodim Private Enterprise. In October of 2012, he became a security guard in Mlyniv Tourism and Local History Center of Students’ Creativity. Oleksii took part in the events of the Revolution of Dignity at Nezalezhnosti Maidan. He was also a volunteer in the Aidar Battalion since February 2014.

However, on December 27, 2015, being at the observation post, Oleksii received a shrapnel wound during the shelling near the village of Novhorodske, Donetsk Oblast. The wounds turned out to be mortal. He was buried on December 30, in the town of  Mlyniv, Mlyniv Raion, Rivne Oblast. Oleksii left a mother and a younger brother who also fought in the Zone of Counter-terrorist Operation.

According to the Presidential Executive Order № 216/2016 on May 18, 2016, the soldier was posthumously awarded the Third Class Order For Bravery “for valor and high professionalism demonstrated in the protection of the state sovereignty and territorial integrity of Ukraine, loyalty to the oath of enlistment”.

According to the decision of Mlyniv Town Council, the street of The 17th of September was renamed after Oleksii Kirys.