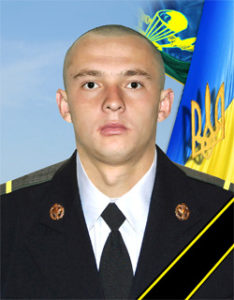 Krokhmal Nazar Ivanovych was born on November 3, 1993 in Mykhailivka village, Radyvyliv district, Rivne region. He went to the 1st form of the secondary school in Mykhailivka in 2000. Since childhood he loved the land, his family and native Ukraine with all his heart, this love and desire to live in a free country he inherited from his great-grandfather Ivan who was an UPA warrior.

Nazar had studied at the Lviv Technical College of Railway Transport from 2009 to 2013. On October 30, 2013, he entered the military service under a contract, and on November 29, he took an oath of allegiance to the Ukrainian nation. He has been dreaming about military profession since school times, and when he became a soldier he felt that this occupation is his vocation. Since August 2014, Nazar has been in the ATO zone as a member of snipers’ formation of Lviv 80th separate high-rise landing squad of the Armed Forces of Ukraine.

He died on November 6, 2014 in the village Nyzhnie, Popasna district of Luhansk region during the shelling of the pontoon crossing by Russian armed formations.

He was awarded the Medal “For Courage” of the 3rd grade (posthumously), “for the courage and high professionalism that were revealed in the protection of state sovereignty and territorial integrity of Ukraine, faithfulness to the military oath” by  the Decree of the President of Ukraine No. 311/2015 since June 4, 2015.

He was a good son, the best friend

Radyvyliv district bade farewell with the Hero on Sunday – 21-year-old Nazar Krokhmal, sniper of a separate formation of the 80th airmobile squad. He was killed on November 6, 2014, during the bombardment by Russian armed formations from with multiple rocket launcher systems “Grad”. Nazar was buried in his native Mykhailivka village. The priests of the UOC-KP prayed at the Church of the Intercession. The village has never seen such a crowded burial. The local people said that “the half of the district” has come. Indeed, not only Nazar’s relatives, residents of the surrounding villages and towns came to bid farewell with Nazar, but also the authorities and the representatives of the public from Radyvyliv, Rivne and Lviv, his sworn brothers and the groupmates of Lviv Technical College of Railway Transport. The head of the district council O. Pastukh and the head of the district administration V. Kondyk with the first deputy I. Shkoliar laid a wreath, expressed compassion to the family of the Ukrainian patriot.

Here are the lines about Nazar Krokhmal from social network: “The first who died in the snipers’ formation. After the bombardment. Only 21 years old. I do not want this boy to be lost in statistics. I want you to remember this open and still childish face. During the bombardment he just took off his body armor, sat down near the dugout to read the Bible.” And his friends spread such words in social network: “They say God takes away the best of us. The days of painful sorrow and grief pass away, as You are not with us now, as You flew away to the unearthly space, leaving memories and sorrows for everyone. The wound can’t be obliterated in the parent’s souls. You were a supporter, an advisor, a good son, and the best friend for everyone. He worried about the nearest and dearest all the time, and forgot to think about himself. The memory of You is always with us. Eternal Life for you in the Kingdom of Heaven and peace of Your soul. Eternal memory”.

Many words were spoken during the funeral. The keynote of the speech – we must never forget him. It’s our holy duty to convey the memory of Nazar and of such heroes to the next generations.

Everyone had a good opinion about – friends, classmates, teachers of Nazar Krokhmal – he was friendly, benevolent, sociable, curious, hardworking, polite, sympathetic, he loved sports, respected the elders and his parents. This lad definitely had plans for future. Because of this, he became a soldier under the military contract at the end of last October, from August 28, this year he became the participant of ATO. He was a brave and courageous paratrooper.

…Heroes do not die!

Such materials are difficult to write. It is difficult when the best people die, the blossom of the nation perishes. He could still live for years, have his own family, bring up children… But a fragment of the bomb took the young life, the ancestry of Krokhmal.

– The grandfather, a UPA soldier, died in 1944 at 34 years old, also in November, told Ivan Volodymyrovych Krokhmal, the father of the Hero, but my father remained after him, however with the Nazar’s death, the genus was interrupted. I congratulated Nazar on his birthday by phone on the third of November (it was the last time I spoke to him), said that if we could survive this November (this is a fatal month for us), everything will be fine. Nazar calmed us down, saying, dad, do not worry… 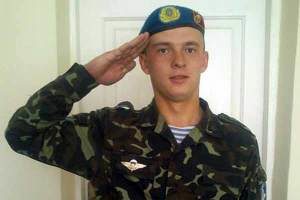 But on November 6, 2014, three days after the 21st year old, during the bombardment of the pontoon crossing near Nyzhnie village in Luhansk region by the Russian armed formations, Nazar Krokhmal – the elder soldier, the sniper of the 80th separate separate high-rise landing squad died. When the bomb arrived, he just took off his body armor, and sat down at the dugout to read the Bible… By the way, this Bible with the traces of blood and other personal things of Nazar, two fragments of the bomb were transferred to his parents in November last year.

The Hero was buried in his native Mykhailivka, the funeral was very crowded.

Nazar Krokhmal was awarded the Medal “For Courage” of the 3rd grade (posthumously), “for the courage and high professionalism that were revealed in the protection of state sovereignty and territorial integrity of Ukraine, faithfulness to the military oath” by the Decree of the President of Ukraine No. 311/2015 since June 4, 2015. Award was given to Nazar’s parents in St. Michael’s Church after the worship by his fellows Mykola Hrytsaichuk and Mykola Kobilnyk. And before that, in April 2015, in the local school of native village a memorial plaque in his honor was opened. In September, the Ukrainian Orthodox Church of Kyiv Patriarchate with the blessing of Patriarch of Rus-Ukraine Filaret awarded (also posthumously) a brave soldier a medal “For sacrifice and love for Ukraine”. This award the already mentioned fellow Mykola Kobilnyk, with assumed name “Eneiko” – the head of public organization “Ukrainian Association of ATO Participants” with the paratroopers of the 80th squad have to bring to the parents on the anniversary of the light memory of Nazar. When Mykola started to read the list of everyone awarded posthumous at the meeting in Drohobych, he got on his knees, and he was supported by other participants of the ATO and more than three thousand people.

Everybody who knew Nazar Krokhmal – his fellows, villagers, teachers and classmates – all remember him as a good person. He was always smiling and sincere. Nazar was an extremely polite and loyal person since childhood. Also he was extremely hardy, had a good physical training and special attitude towards animals. A favorite horse has always obeyed Nazar. Like a real Cossack. The boy wanted to be a defender of his native state with the Cossack fervency. He was a professional in his affair. Disciplined and organized. He was courageous and brave like his comrades. And four of the six paratrooper snipers died in the battlefield with the current invaders.

– There were seven of them in class: four girls – Ira Baraban, Yulia Matvieieva, Olia Bahno, Olia Khmeliuk and three boys – Nazar Krokhmal, Mykola Babych and Serhii Supruniuk, – recalls the teacher of St. Michael’s school, the class teacher Valentyna Dmytrivna Konashevska. – They were friends, they supported each other. Nazar stood out by his high sense of righteousness and had an objective self-esteem. He never had conflicts with teachers, he liked the subjects of the natural sciences. He was active in the public life of school and village, he liked to do sports.

Actually, sport has become determinative for Nazar in choosing the way of life.

He entered Lviv Technical College of Railway Transport after graduating from the Mykhailivska school. He was invincible in arm wrestling, he even won the championship there. 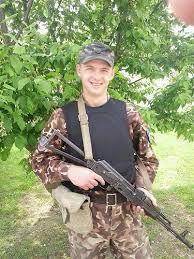 There was no work at the end of studying at the technical college. He decided to go to the army under the contract. His mother tried to refuse (his father was in Kyiv at that time). But Nazar showed his character and insisted on his wish. This idea was promoted by his sports connections. He started to pass the Military Medical Commission in June, it was stretched out for a long time and ended in September.

Tense training. Nazar endured the difficulties of military service duly with dignity, integrity and persistence. Three pair of sneakers were demolished shortly. And he became a sniper not accidentally. As Ivan Volodymyrovych said, Nazar was a congenial hunter. When he was still studying in 8th form, his father bought the son a pneumatic rifle, so the young man helped to get trophies during the hunting of birds.

Nazar Krokhmal died for Ukraine when he was 21. And someone they wrote in one of social networks a year ago, “I do not want this boy to be lost in statistics. I want you to remember this open and still childish face”.

“We, teachers, believe that children will set Nazar’s life and feat as an example”, says V. D. Konashevska, the class teacher. – And his sight from the memorial plaque would remind everyone that he died for us. We will never forget it. Because he is the Hero of Ukraine.

Yes, we all have no right to forget him. Eternal Memory and Glory to the Hero! The low bow and respect to his parents.

– a medal of the Ukrainian Orthodox Church of Kyiv Patriarchate “For sacrifice and love for Ukraine”;

– the breastplate of the public organization “Slaves are not let in to Paradise” for a significant contribution to the preservation of the Ukraine;

– an award of the public organization “Ukrainian Association of ATO Participants”.