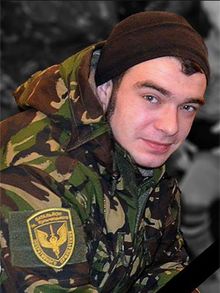 Roman chuk was born on November 13, 1993, in the town of  Demydivka, Rivne Oblast. After finishing Demydivka Higher Vocational School № 25, he worked a calisthenics senior coach. At the same time, Roman was a champion of the regional competitions in athletics.

Later, Roman served as a seaman holding the rank of sergeant in the Ukrainian Navy in Sevastopol. From the first day of the Revolution of Dignity, he was an active participant in it. He registered in the medical service of Maidan.

Roman died on January 5, near the village of Minkivka, Artemivsk Raion on the way to Donetsk Oblast. It was the result of the road accident: the bus with the soldiers hit the military truck. The reason for this catastrophe became bad weather conditions, specifically glazed frost and poor visibility.

According to the Presidential Executive Order № 365/2015 on June 28, 2015, Roman Zubchuk was posthumously awarded the Third Class Order For Bravery “for valor and high professionalism demonstrated in the protection of the state sovereignty and territorial integrity of Ukraine, loyalty to the oath of enlistment”.

We really hoped that the pain of loss did not come to our city – Demydivka land because it is the most difficult to bury the ones we love. It was believed that no mother would let her baby go into eternity; bitter tears would not drop on the coffin covered with the blue and yellow flag, and the future will be beautiful because our defenders struggle so fiercely for it. How painful was to know about a terrible car accident that took away the life of a young inhabitant, a son, the most important grandchild, a classmate, the best friend and serious brother-in-arms, a sailor of the Ukraine Navy Reserve, a militant of Maidan, a sniper of the National Guard Special Battalion of General S. Kulchytskyi – Zubchuk Roman. This terrible day will stay forever in the memory of those who came to lead the last way of the Hero.  When the funeral procession walked from the Hero’s home slowly, even the sky cried and time stopped for that moment. The photo of Roman smiling was ahead carrying by the girls. The guard of honor, the military brass band, comrades, friends, brothers-in-arms from the Maidan carried Roman’s coffin. The whole city accompanied the Hero, bending their heads in grief.

The public memorial service began where everyone could say the last farewell words to Roman. At that time there was no strength to hold the groaning of the half-conscious mother, the mourning of the exhausted grandmother, and the tears of the soldiers. No one did not want to realize that his life comes to an end so early. And people came and came; it seemed that farewell never ended. Relatives begged God to return the most important person to life.

The head of the district council S. Grach, the Romanian militants of the battalion of General S. Kulchytskyi: Vadym Azarian, Mykhaylo Kondrat, and activists from Maidan, who personally knew the boy made speeches in the street. It was clear that Roman was bright and sincere, kind and frank, responsible and conscious, loved his mother, took care of his grandmother. But he passionately loved Ukraine and was ready to defend it today, tomorrow and always. He defended its honor on the Maidan, defended its integrity and freedom in the ATO zone, voluntarily entered to the ranks of the National Guard, and gave his life for the sake of it. This is how his mother brought him up and grandmother cherished him. He became a worthful son of Ukraine and a true Hero for each of us.

Those who were with him side by side, defending our Motherland, called him “Seaman” – who dreamt about the sea. During the Revolution of Dignity, he was a paramedic in a group called “Hell Barrel”. Sometimes his congeners had to stop him from thoughtless actions because Roman was very spirited. He was in Sloviansk, in Vuglegirsk, on the Debaltsevskii bridgehead, where he consulted the snipers, taught them military specialty, and was a very hot fighter and true patriot, who was always drawn into battle.

Roman was buried the way he commanded: in naval form, with the flag of Ukraine and with a huge number of flowers. Before the departure he had a bad premonition and told the last will to his grandma Nina, and the second “grandmother” Valentina from Kiev, who during Roman’s stay on the Maidan became as his own. He sang as a good-bye song: “Plant a young tree of sycamore on my grave”. The petals of carnations spread the last way of the young soldier. Over a thousand people from Demydivshchyna moved along the coffin to the church. Archpriest Vasyl Ivanyk, the Holy Trinity Orthodox Church of the UOC-KP, prayed for the peace of the soul of a tragically deceased warrior, with the Cathedral of the priests of Demidov’s deanery. Three shots from the Guard Honor’s guns rushed the heavens in the cemetery. Each extinguished candle which symbolized life was a heavy pain. We bow our heads low and pray for the peace of the souls of each warrior.

Heroes do not die! 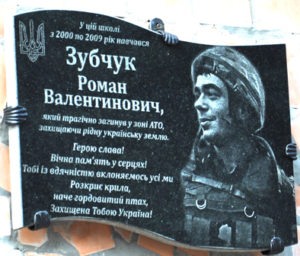 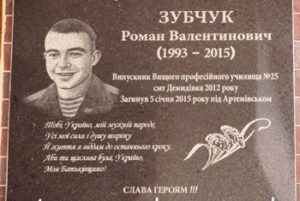 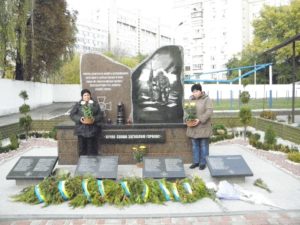 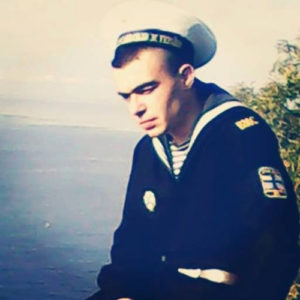 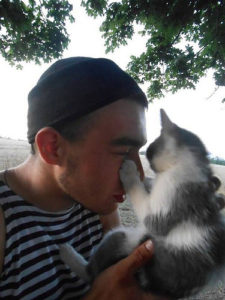 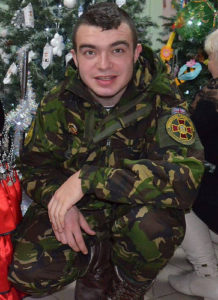 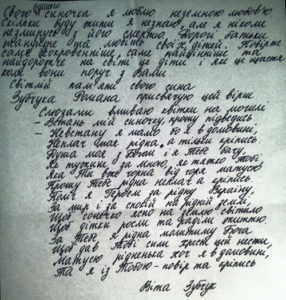