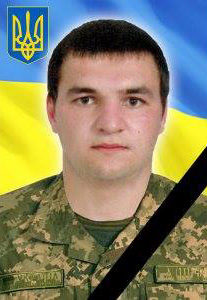 His life broke off quite early on the 28th year of his life. On November 14 the killed soldier of ATO, a senior soldier Serhii Tarasiuk was waited in Kuznietsovsk since 5 o’clock in the morning.

Visitation to a soldier took place in the Palace of Culture. On his last journey, he was accompanied by relatives, loved ones, combat colleagues, members of the ATO, local authorities and caring residents.  Serhii was chanted in the Savior-Transfiguration Cathedral. After the Requiem, he was buried in the Starorafalivske Cemetery in the town of Kuznetsovsk. The serviceman left a father, a mother, and a brother.

According to the decision of Kuznetsovsk City Council on 15.12.2015 №17, Serhii Tarasiuk was awarded the title “Honorary Citizen of the town of Kuznetsovsk” (posthumously).