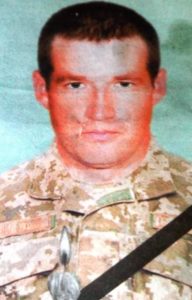 Serhii Us was born on June 11, 1989, in the village of Ukrainka, Ostroh Raion, Rivne Oblast. He studied at Ukrainka Secondary School, which he graduated from in 2005. After finishing school he applied for a course in Mechanics at Kvasyliv Vocational School.

Serhii served in the Armed Forces of Ukraine in the town of Dievichki, Kyiv Oblast, later within three years he continued his service by contract in the town of Novohrad-Volynskyi.

The junior sergeant of the 80-th Lviv Airmobile Brigade since November 11, 2015, was mobilized to the ranks of the Armed Forces of Ukrainian, he took part in the battle actions near the village of Konstiantynivka and the village of Drushkivka, carried out the cover of certain areas of the State border. At the end of September 2016, he was demobilized.  Later Serhii began his contract service in the Anti-aircraft Missile Regiment in the town of Shepetivka. There he was detached to the 128th Mountain Brigade.

Serhii died on 01.09.2017. Serhii was buried during Christmas holidays in his native village.

“Ukrainka is crying again for its son”

This year’s Christmas mood in our village was overshadowed by the terrible news of the death of a fellow villager, a warrior Us Serhii.

Starting from November 11, 2015, Serhii was mobilized into the ranks of the Ukrainian Army. A junior sergeant of the 80th Lviv air mobile brigade honorably performed his military duty – constantly participated in military engagements within Kostiantynivka and Druzhkivka, covered a specific section of the state border. On September 25, 2015, when he returned home, he could not just sit and wait – he began to serve in the anti-aircraft missile regiment in Shepetivka, under a contract. From there, he was sent to 128th Mountain Brigade. Serhii was born man of war, a true connoisseur of his craft. Responsible, brave, he was a true patriot. And yet he was a very decent, benevolent and tranquil person.

Many guys from Ukrainka village have already returned from Anti-Terrorist Operation, many of them still serve. From the first days of the war in our Holy Trinity Church there have been sincere prayers for soldiers, volunteers – living and dead. And for the first time – here is a funeral. This tragedy was like a thunderbolt for every family. Therefore, many friends, fellow villagers, people from the surrounding villages came to pay last respects . Funeral procession moved slowly to the church…

The sorrowful melody performed by the military orchestra was followed by the choir singing the “Holy God…”, movingly sounded “The duck is swimming…”(“Plyne kacha”- Пливе кача), carnations of sadness fell on the road. People stood on both sides – praying, kneeling, giving the last debt to the hero, and joined the procession. It seemed that the heavens themselves yearned and cried, covering this indescribable grief with snow. The burial service of Serhii was read by three priests: the prior of the Holy Trinity Church of Ukrainka village Father Anatolii, Father Vitalii from Ivachkiv village and Father Oleksandr from Kutianka village, chaplain of the civil-military cooperation group “Operational tactical grouping – Luhansk”.  In his sermon Fr. Anatolii addressed the words of deep condolences to his relatives and told that he knew Serhii as a kind and responsive person who would forever remain in the memory of all who knew him young, brave, decent, a man who defended his Motherland. Fr. Oleksandr Diachuk also preached with a sermon. He emphasized the importance of the gospel words that we should be united and live in peace, the Lord descended to Calvary to free us from sin, thereby showing His love. And this fellow of ours descended to his Calvary, fulfilling his duty, defending his people. And by this he revealed his love for his neighbor, because according to the Gospel, “greater love has no one than this: to lay down one’s life for one’s friends…” (John 15:13).  “We all owe this young man,- said Fr. Oleksandr, – because we can live peacefully, celebrate, solve our problems, thanks to the fact that we are protected by such guys! ” Showing great respect for the deceased, the coffin with the body was carried around the temple and the procession went to the cemetery. Part of the way the coffin was carried on hands.

“Goodbye, our hero, goodbye for the last time, because you will never come back to us …” – was heard over the grave.

The Anthem of Ukraine was performed by the brass band, and the fighting brothers honored him with a machine-gun burst.

With deep condolences to Serhii’s mother and relatives,

the fellow villagers of Ukrainka.