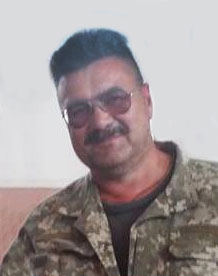 Due to his family’s decision, Oleksandr Vasiuk was buried in the neighborhood “Tynne” of the city of Rivne.

In Rivne, people said their last goodbye to Oleksandr Vasyuk who died in the ATO (VIDEO)

Rivne lost a hero, son and father. In Rivne, people said “farewell” to a tankman Oleksandr Vasyuk who was killed in the ATO. A lot of people came to see the brave and fearless soldier to his final journey.

The sworn brothers called him simply “Uncle Sasha”. So, a year ago, Oleksandr Vasyuk decided not to stay aside, but to go to the East as a volunteer. An example of such self-sacrifice was his older brother Ivan. He served in the 54th separate mechanized brigade as a tanker. Deputy commander Igor Chepizhko told us that he still remembered the day he met Oleksandr. Everyone liked that able-bodied and smiling man at the first sight.

Igor Chepizhko, lieutenant, Deputy Commander of the 54th separate mechanized brigade said, “From the very first days, he showed himself as a brave soldier. First, he was very responsible, always volunteered and wanted to be first on any task. One could always rely on him in the most difficult moments.”

The man was injured during shelling near the city of Bakhmut, Donetsk Region. He was scorched in the tank.

The soldier died in the Dnipropetrovsk regional hospital and was buried with honors in Rivne Region.

Yurii Havrylov, colonel, serviceman of the 54th individual mechanized brigade said, “I am sympathetic to all of you and all Rivne Region that such person as Oleksandr has died. But his life was taken not in vain.”

The soldier died at the 50th anniversary of life. He had a wife and a son.

Rivne saw the dead Oleksandr Vasiuk to his final journey, standing on their knees

Today in Rivne, people said “farewell to the dead soldier of the 54th separate mechanized brigade Oleksandr Vasiuk. In the City Hall gathered not only relatives and friends of Oleksandr, but also those who had not known him before but wanted to honor him.

After a month of training at the Yavoriv military training ground, Oleksandr served in the 54th independent mechanized brigade. “Gods of War” – so it is written on the chevrons of soldiers who came to say the last goodbye to their sworn brother. He was one of them…

His friend and comrade Serhii Svyrydenko came to say the goodbye to Oleksandr. He said th 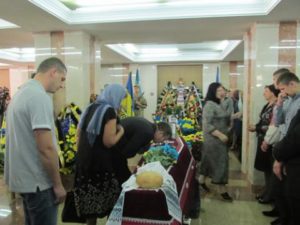 at he met Oleksandr when our countryman arrived at the brigade for further service in August 2015. They served in one battery, but on different cannon.

Serhii said that Oleksandr had been a kind man. He was not a man of many words, when he said something that was very apt. He was kind. You know a big human can be truly kind. Never boasted. We had talked more about civil life. He was fond of solving crossword puzzles, so when I went to the city, he always asked to bring magazines with crossword puzzles.

Serhii points on his face and says:

“Do you see my mustache? He wanted me to grow them out. He said: How can a Cossack be without a mustache?”

Senior Soldier of the Armed Forces of Ukraine Oleksandr Vasiuk died in the Dniprovskyi hospital due to injuries that he had got near Bakhmut, Donetsk Region. Our countryman was one day away from his 51st birthday when he died. The soldier had had a wife Vita and a son – a student Volodymyr.